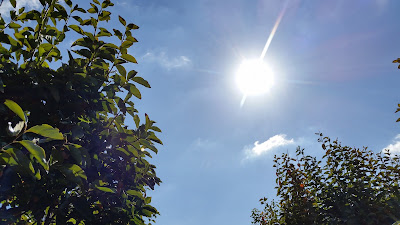 "Abide in me, and I in you. As the branch cannot bear fruit by itself, unless it abides in the vine, neither can you, unless you abide in me. I am the vine; you are the branches. Whoever abides in me and I in him, he it is that bears much fruit, for apart from me you can do nothing.  If anyone does not abide in me he is thrown away like a branch and withers; and the branches are gathered, thrown into the fire, and burned. If you abide in me, and my words abide in you, ask whatever you wish, and it will be done for you." - John 15:4-7 (ESV)

It was a nice break from hotter days these past, few weeks. My family and I hopped into the car and with an unplanned destination chose to have egg rolls and Pho soup from a distant, favorite Vietnamese restaurant.

“Let’s go!” we all cried in unison and changed our mind about skipping the morning agreement of fruit picking in yet, an unexplored area nearby.

November is my favorite month because I know the weather starts to cool off. I am also reminded that “persimmons” are due to be enjoyed this time. We don’t know that there is a persimmon picking farm nearby.

The winding, 2-lane roads offered majestic views of ranches with horses freely roaming, a creek filled with water that my husband thought it was a lake at first, and a well-controlled green houses prompted me to take a pic as I gazed at those neat rows of plants or vegetables. Not forgetting the views of the mountain from up ahead, hills with green vegetation and even a stone quarry it seemed.

My son parked his car and immediately, my husband was offered some buckets of his choosing and he got 3 pruners. Many trees of persimmons met us and they were only a few steps away from where the buckets, pruners, and caretakers were.

It was exciting to see many fruits. But we didn’t know, the harvest season started even as earlier as October. Many fruits were a little higher and perhaps, the fruits on the lower branches were already picked. Still…We were all excited and wished we knew even then. Yet, grateful we found this place and how cheap! Nothing could beat 60 cents per pound because out in the markets, I would get those persimmons for 99 cents a pound or worse a dollar something more. I left the task of reaching for the fruits attached on higher branches to my son and my husband. They were known as “Fuyu persimmons” and oh, so sweet! Crispy like apples. That was how I wanted them, not the other kind called “Hachiya” which was more mushy like and you had to wait for it to be ripe before it could be enjoyed. Fuyu for me was the best!

“It’s enough, you guys!” I yelled when I saw the bucket was filled halfway.

“Only one more,” my husband replied with an excited tone of voice.

“Watch out!” my husband warned at one point. “There are rotting ones that fell on the ground. Don’t step on them.”

We took a few pictures, saw many more other trees we could no longer approach! And a tall mountain in the distance.

By the time my husband carried the green bucket back to that center, it weighed 14 pounds. That was a lot of fruit for only 8 dollars something.

I got to share some with my friend and my husband with a co-worker who he always worked with daily. There were still lots left in our kitchen counter.

“It’s open until December, they said,” my husband told me and my son.

The three of us, grinning ear to ear, agreeing in silence that we would definitely go back.

Deep inside, we knew…

Not only they are cheap, sweet and not that far to go to. There is nothing sweeter than the three of us creating that memory, being reminded to always “look up” not just to reach the fruits but to remember where the good things in life come from. Instilling the truth in our hearts that our lives can either produce good fruits as Christians if we are abiding by God’s Word or dropping like those rotten ones if we stray away from Jesus.