It's Not About Tennis Anymore 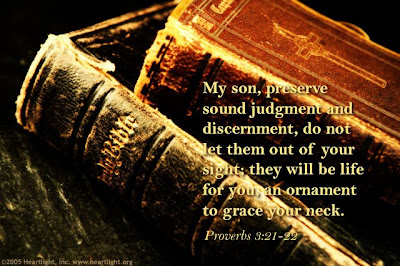 "God never gives us discernment in order that we may criticize, but that we may intercede." ------ Oswald Chambers


Everyday, I always remind my son to always pray and ask for the Lord’s protection and discernment. As they started a busy schedule playing tennis, I was also busy as I volunteered to have some players ride with us in our car, whenever we needed to go to another school to compete.

There was a player who was very interested to have my son as his partner in the “doubles” game. He was so eager that he asked the coach if he could be paired with my son. The request was granted and when there was a “home” game, they won as they tried their partnership for the first time. That player was elated! My son, with a calm composure, was happy to be able to find a teammate he could be working with. Until…

We went to another school and they lost this time. The coach told me and my hubby that the other player though from the other school was already way ahead, playing in varsity and got demoted. In order for him to go back to his previous status, he needed to work his way up by beating junior varsity. So, the coach said that even though my son and the other boy lost, it was a good game and they played well since the score was close. But I noticed the boy distancing himself from my son. He seemed upset about the loss. I heard my son asked the other boy if he was okay. He said he was upset with himself. But the whole time, as I waited for the players to get done with the matches, I saw him always far from my son, either talking with some other members or just silent on his own. My son didn’t think of any and that broke my heart. Because I didn’t want that childlike-faith and innocence to be tainted with this world’s hypocrisy and self-centeredness. My own discernment was that: that boy was upset with my son. Actions spoke louder than his words!

“Dude, I’m an atheist!” uttered this same boy while riding in our car as we went to the other school. I wasn’t sure what precipitated this conversation.

“Why are you an atheist?” asked the other player riding with us.

“Just because I’m an atheist!” he proudly stated…

I spoke with my son while having breakfast yesterday and told him, no matter what he would see from the other boy‘s actions, just keep praying for this boy and for their being “buddies” and pray to the Lord and only please the Lord, no one else. The truth came out during their training in the afternoon. The coach had noticed that the boy didn’t feel like playing well while practicing with my son. So the coach asked my son if there was something going on. My son told the coach he wasn’t sure what the other boy was feeling. But that if there were any errors during the game, he only would talk about his own faults and never blamed the other boy. And that after losing, he asked him if he was okay and he denied being upset with my son. He also asked him if he wanted to work on their mistakes together to improve their skills.

The coach was more concerned with my son seeing how hard he worked every time and always respected others. He asked my son how he felt about this boy's attitude towards him. I was so proud of my son’s answer, “It’s okay. It doesn't bother me. I know we can learn from our mistakes. Even if he doesn’t want to play with me, that’s okay.” So, the coach told him that maybe he could try to play singles, instead of doubles.

When I picked my son up after their training, he talked about the other boy with me and that he knew I was right about praying for protection and discernment at all times. I asked my son how he viewed this incident. We both agreed on the same thing: This was a blessing from the Lord: “to find out this boy’s attitude of not being a good sport while the game was still at a very early stage“. Because once they started playing “league” games, everything would count and to have this kind of attitude would only affect each other’s performance. My son witnessed and processed that it would be the same in this life’s journey. That he would be facing both the ups and downs. That despite being on the down side, he knew he must accept it and he could grow from it because life is not always about victory. That during losses, true courage means to accept that you have done something wrong, admit it, and learn from it.

Now, he knows why it’s important to ask for His discernment. It’s because we live with others who do not share the same values and convictions. And it’s only by His grace that he can make the right choices when making decisions. Right decisions that others who do not know Christ can see. And hopefully, through his actions, others can see the godly path he’s walking on and would want to be walking on that same road. Road that points to Jesus. All because of discernment.

“You did not choose me, but I chose you and appointed you to go and bear fruit—fruit that will last. Then the Father will give you whatever you ask in my name.” - John 15:16