The Past Is A Part of Today and Tomorrow's Actions

There were 20 something bodies that morning to be seen by me for sick call. I learned to prioritize by doing the treatments first [like blood pressure checks and dressing changes] to have them out of the way. Then, the sick call I could call one by one and usually would run smoothly.
The clinic’s door was narrow. A few steps away was a desk, telephone, and other medical equipments. The nearby sink was crowded with jars full of gauzes, tongue blades, band-aids, cotton balls, bottles of saline and hand soap.
When I did all the treatments, I called the first inmate who requested a sick call. I noticed he only spoke Spanish so I needed an interpreter. Even before I asked if someone would volunteer to interpret, a young male inmate worker stepped up and eagerly offered his help. The deputy was just nearby.
One thing I learned working in this setting was to never turn my back on the inmates. Even if it seemed that I had my back turned, my eyes would be busy revolving around me and my ears would be fully opened to always be alert on what was going on.
I motioned for the sick inmate to sit on the chair next to my desk. The interpreter positioned himself by the sink which was fine with me because I wanted to give the other inmate some privacy, too and I didn’t want both of them to crowd my clinic. [That was also for my own safety].
I knew the volunteer. He was a good, hard working inmate. I would see him help serve the food trays and clean up after they were served. He put things in order.
He was leaning by the ledge of the sink the whole time I was doing sick call. When I got done seeing the sick inmate, the volunteer started to head out the door, too.
“Sir, I didn’t ask you to leave yet,” I politely told the interpreter.
“I thought you’re done seeing him, Ma’am?” he replied.
“Yes, I was. I want to thank you for interpreting for us. I want you to know I really appreciated that. Except with you stealing some of my band-aids!” 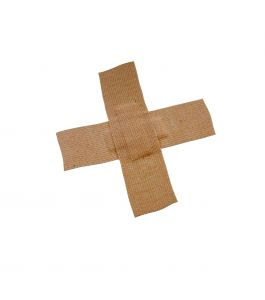 “Whoa!,” he exclaimed, as his jaw seemed to have dropped on the ground.
“What? I didn’t steal anything!” he protested. [By this time, the deputy was standing by the door, too].
“You didn’t? Are you sure? Because now, I would like you to turn around and show the deputy the left back pocket of your pants”, I calmly requested. I saw him got a little nervous as a few beads of sweats formed on his forehead.
Sure enough, approximately 10 band-aid dressings were brought up by the digits of his left hand. He was so embarrassed and didn’t know what to say. His face turned red.
“Do you want me to put him on discipline, Nurse?,” asked the deputy [for stealing and lying].
“No. Will you just let me speak with him, please?” I told the deputy. [He took a few steps away to give us some privacy].
“Sir, I’m not here to tell you what’s right and what’s wrong. But you know the rules here. All you have to do is try to ask me if you can have some of those band-aids. I’m sure I wouldn’t mind giving you a few as a token of my appreciation for helping me with that inmate.”
“Ma’am, how did you know I did that? I’m so sorry. Thank you so much for not putting me on discipline,” his face with a relieved expression.
“I wouldn’t tell you how I knew. But I know you as a hard worker here. Don’t change that. You may go now,” I uttered.
“Ma’am, you’re good!” he replied softly. “Thank you again. I won’t do that again.” His body disappeared with the rest of the bodies for sick calls.
That inmate was a hard worker, always helpful to custody and Nursing staff. But his actions were totally different that day and was the opposite of the character I had known him for.
As Christians, our past is an important part of today’s actions and tomorrow’s plans. The past affects our decisions and actions today. In turn, also affects the future.
There are lessons to learn and mistakes that need not be repeated. Yesterday’s obedience to God does not remove the possibility of present disobedience.
How are you using your success from the past now and how well are you using it to prepare for the future?
Inspired: 6/17/2009 02:22:00 PM 23 comments: