The Valley Of Decision 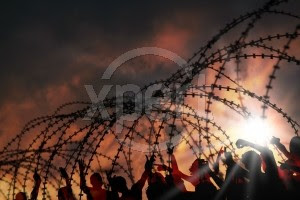 The smell of smoke seemed to have been seeping through the vent up on the ceiling, as I entered the “sick call requests” from inmates in the computer for that morning.


“Code Red!,” blared over the radio. [It means any movement was not allowed anywhere in the facility except for the deputies if they were needed to go to a particular place].


“All available deputies! Please 87 [meet] B blocks! Riot in B blocks!”


B block’s tv was perched up high in one corner of the unit. The news was being shown and one inmate wanted the deputy to change the channel to something that he wanted to watch. The request was denied.


That inmate became belligerent and with a razor blade from his shaver, managed to pull it out in an instant. He unloosened one socket and exposed some wiring. Rubbing it with some pieces of paper, smoke billowed until a small fire became visible. As other inmates saw what he did, feeling the excitement of adrenaline, of power, of control, other inmates joined in.


Not long after, most of the housed inmates started yelling profanities, trashing whatever their hands could lay on, destroying any property that belonged to the county’s jail: beds were torn, styrofoam cups were strewn all over, papers were thrown into the air and some were fed into the small fire that made it grew a little bit more. More smoke filled the block, until it found its way through the vent which was also connected to the jail’s medical clinic. Others started throwing feces and urine outside the bars, thinking that doing so would prevent any deputies from approaching their unit.


The order was given for them to stay on their designated beds or they would face an even tougher punishment, as some other deputies started showing up within a matter of seconds, some donned with anti-riot gears. Pepper sprays were released into the atmosphere of that block, temporarily halting the dangerous revelry and stopping the rioters from doing any further damage. The painful mists caused a bad sting to their eyes and a burning sensation to their inner throats, that breathing made it harder for some.


Soon after, everyone was under control and was put on a “lockdown”. They were kept in their individual cells as some hidden bars came down and separated each man from each other. The bars prevented the on-going riot and served as a protection for the custody staff.


Every participants knew they were in deeper trouble this time. They were being filmed by one deputy so that there was a solid evidence of “who did what”. The once strong display of unity in causing troubles was now replaced with fear of the known consequences of what they just did. The loud, proud mouths were sealed, as beads of sweats started appearing on their brows and foreheads. Some attempted to utter their apologetic remarks. But too late! Most of them were in it! Those that didn’t participate would be spared. But the ones who rioted would be punished “big time”.


Like the inmates in trouble awaiting their punishment, Joel also described the same situation where there was a lot of people waiting in the “valley of decision” or “judgment”…


“Thousands upon thousands are waiting in the valley of decision. It is there that the day of the Lord will soon arrive.” - Joel 3:14


All of us will face judgment. The dead, the living and even those that are yet to be born. Has someone warned you about the consequences of your sins? Would you rather continue living in your own rioting with your wanton manners or would you rather stay put and listen to the One Who told you to stop living that wanton kind of life and surrender to Him?


Yes, you may continue the rioting but if I were you, I wouldn’t wait until I get to that “valley of decision.” For Someone is recording our rioting and it would be too late to say “I’m sorry” by then.


And the punishment will be “big”….