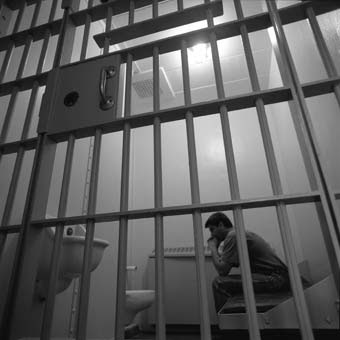 “Ma’am, he started hitting his head on the glass window in the squad car as soon as I entered the jail’s yard,” uttered the arresting officer to me and the LVN who tagged along with me, wanting to see some actions at the jail’s Intake.

There he was, a middle-aged man, with slightly reddish eyes but the red streak across his forehead stood out more. He was very upset!

“Aaarrggghhhh!” he screamed as he stomped his feet on the cold ground inside the “Sobering” cell. He stopped when he saw me, the LVN, and the 3 deputies with us nearing the big glass window where he was. He sat still, stopped screaming and stomping. I could sense he was drunk but still was coherent enough to know what was going on.

The deputy slowly opened the heavy, metal door. 2 of them went inside first to determine if it was safe for me and the other nurse to talk with him and check his vital signs. He was cooperating at that time.

I took his radial pulse. “120 beats per minute”. He denied using street drugs. I could hear his deep, loud sigh, an angry kind of rhythm, as he stared at the cop who arrested him. I had the LVN took his blood pressure. “160/90,” she stated as she glanced at me, waiting for my signal that I would not accept the inmate for a racy pulse and high BP. But not yet.

“You need to calm down!” I commanded to the man.

“Can’t you see? I’m trying to calm down! Aaaaarrrr…” he replied with an angry tone and took another penetrating glare toward the arresting cop.

“How can you calm down when you remained angry this whole time? Just answer me. Why were you arrested?” as I raised my voice slightly higher but with a respectful way.

“More,” I told him. And more deep breaths, he did…Still. No answer. Then, I turned to the LVN and requested for her to take his BP again. “140/88,” she said smiling at me. She couldn’t believe that his BP would become lower in a matter of few minutes.

“Give me his health screen paper, Officer. Let me sign it, so you can book him now.”

“Thank you so much, Ma’am,” he replied with an obvious expression of relief that he didn’t need to bring his arrestee to our main prison. And the man remained still. He was not hitting his head anymore. He was quiet and appeared to be contemplating the answer to the question I posed.


He was caught driving drunk. I don’t know how many times. Yet, every time he is arrested, he gets angry. But he caused this to himself. Year after year, he is trapped in that same habit.

How is it different with our New Year’s Resolutions? We try to improve things in our lives, year after year, only to become angry and disappointed as nothing new happened around December time. We put out the best goals we can think of and become determined to complete them. Still. We fail. Then, we’re angry.

Let’s stop resisting the Authority. When He finds us, don’t get angry at Him. He just wants the best for you. He doesn’t want you to get hurt. And as for us who had yielded to His power before, we still fall into sin. We become proud of the things we have accomplished. Forgetting it was not our strength that did that. But His grace. How far have we, believers or non-believers, have turned away from the Authority wanting us to be successful?

There is this NUMBER 1 resolution that we must aim for: To turn back to God, repent for our sins and walk humbly with Him, not only for this year, but for the rest of our lives. We are all familiar with this verse:

2 Chronicles 7:14 - “Then if my people who are called by my name will humble themselves and pray and seek my face and turn from their wicked ways, I will hear from heaven and will forgive their sins and heal their land.”

15 - “I will listen to every prayer made in this place, 16for I have chosen this Temple and set it apart to be my home forever. My eyes and my heart will always be here.”

Let’s all stop resisting the Authority. Sit still. Contemplate on humbling ourselves by admitting our sins, praying to God for His forgiveness and seeking Him continually and turn away from our sinful behavior. This is the best goal we can all achieve, not only for the year 2010 but for the rest of our lives.

Because true repentance is beyond all these words. It is changed behavior.

Friends, the Lord brought this to mind, many hours after I had already posted this[added at 0815 hrs.]: