In front of my grueling, evaluating eyes, he was smiling and looked happy the whole time. With reddish white part of his eyes that stuck out during the initial questioning, his breath reeked slightly like that of alcohol.


This young inmate vomited while the unit’s deputy was checking on everyone. He was the only one in his cell. His vomit sounded an alarm to the deputy’s sensitive nose. The vomitus smelled like “pruno” [prison wine]…


Warning him that I would raise his shirt to further search for any abnormal findings, he calmly okayed me. His movement slightly restricted as his arms were handcuffed to his back. 2 deputies guarded us the whole time.


Searching intently, I found a small bump on his right forearm, where the visible vein protruded. It was slightly reddish with what appeared to be like a “prick” in the middle of that reddish spot.


With his vital signs being normal, there was no other peculiar things on him except for that bump and being slightly drunk after ingesting the illegal self-made wine. His speech was clear. He even had steady gait.


But prior to him coming, I reviewed his original charges which I sometimes performed to see if there would be any relation to whatever I would discover with their health problems. He had been in the jail for over a year after committing the use of illegal substance.


“Aha!” [A light just went on!]... Despite the slight protest from the jail’s main core of transportation deputies [the one assigning deputies that take inmate to the court, hospitals or other places], the person in charge had no choice but to obey regarding my decision to send this inmate to the county’s hospital to be evaluated for a possible just recent use of illegal substance.


After many hours had passed, as I peered into the lab result taken at the hospital, this inmate’s drug screen turned positive for opiates. [Opiates can come from use of heroin or other drugs like Morphine used for management of pain control]. Wherever he got that drug and illegally used it inside the prison, I just knew at that point that there would be a massive investigation on him, and that, his prison time would be longer because of this possible charge that would be added.


He could have been nearing the end of his prison term. But his habits kept winning over him. The freedom he could have attained in just a matter of days, had just slipped through him. 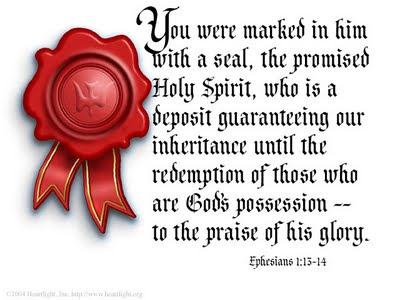 In this spiritual journey we are in, us, Christians, would have been free if we don’t go back to our old habits, too. We all found that freedom when we receive Christ into our hearts. But sad to say, when we don’t listen to His commands, that freedom slips through us. We may not be physically locked up, but spiritually, we are. And in that process of committing sins again, we lock up “His Holy Spirit”, together with ours. In short, we GRIEVE the Spirit.


His activity within us is quenched. Our lives are aimless again when that happens, since we won’t experience the fullness of His Spirit working and His power in and through us. When we are filled with the Spirit, it means freedom for Him to occupy every part of our lives. We are guided by Him and controlled by Him.


Sins stop us from the filling of His Holy Spirit. And only by being obedient to God can we maintain that kind of relationship. If we remain carnal, we will not experience the abundant and fruitful Christian life…

Ephesians 4:30 - “Don’t grieve God. Don’t break His heart. His Holy Spirit, moving and breathing in you, is the most intimate part of your life, making you fit for Himself. Don’t take such a gift for granted.” [The Message]


Ephesians 5:18-20 - “Don’t drink too much wine. That cheapens your life. Drink the Spirit of God, huge draughts of Him. Sing hymns instead of drinking songs! Sing songs from your heart to Christ. Sing praises over everything, any excuse for a song to God the Father in the name of our Master, Jesus Christ.” [The Message]
Inspired: 9/30/2009 05:38:00 AM 9 comments: