A man in his early 20’s was naked, drunk and yelling profanities outside the bar’s door. The owner of the bar called the police who immediately showed up. The man became combative and was resisting arrest.

I was the Intake Nurse working that night, orientating a new nurse. It was hard to work in that place as the new arrestees were brought by police officers, loaded with alcohol or drug substances, combative or resisting arrest until they even get there in the jail. Their behavior could be unpredictable. Sometimes, it was difficult to get straight answers when medical questions were thrown at them.

It was my duty to assess them well and decide whether they would be medically fit to stay in the jail. If not, they get sent to the hospital to be evaluated first and only when the ER doctors release them back to jail, could they be processed and booked.

“Intake Nurse, can you meet us in the yard? Combative here,” requested by the Intake Deputy.

“Intake Nurse copy,” I answered over the radio, as I grabbed the blood pressure cuff and my stethoscope.

I heard the loud yelling coming from the Male Intake Yard. The same man was in no fear to resist his arrest despite seeing at least ten deputies, not including his arresting officers. He was yelling at the top of his lungs, being belligerent.

Before I showed up in the yard as I tried to finish asking another arrestee ahead of him, I heard the commotion inside, near the Nurse’s clinic. They brought the combative man in the “Search and Hold” area, still yelling, trying to kick, trying to bite, anything, to show that he was not afraid of the authorities. An Intake Deputy approached the door and asked me if I didn’t mind assessing him there. To which I obliged.

“Go away! Go away from me!” he screamed.

“Sir, I’m the nurse here and I just need to make sure you are not sick to stay here,” I calmly responded.

“No! Go away! I want my mother!” still crouching, his face filled with terror.

“Who’s your mother?” I asked [to assess his orientation, too at the same time].

“Devlin! Her name is Devlin” still screaming and the smell of alcohol filled that small space as he talked. He won’t allow me to approach him so I quickly examined him with my eyes to make sure that there were no wounds or no head traumas. I motioned for the deputy to bring him to a sobering cell so we could just monitor him. When he would sober up, that was when I would ask him the medical questionnaires.

I went back to my little clinic. I started praying softly, no one could hear me but I knew my Lord would. I prayed for discernment and protection and started praying for this man. The nurse I was orientating forced me to take my break at that time and told me she would cover for me. She knew we had a long night and that I looked tired. Refreshed after my short break, I headed back to the Intake Nurse’s Clinic. I could hear a man’s voice echoing even on the other side of the Female Intake, humming to what sounded like a chant but his voice sounded like there were 7 voices. I saw some officers looking at him as he did that through the big, glass window, obviously amused by what they were witnessing.

My orientee was so excited to see me back and said, “That was the combative guy! He’s humming like he’s praying or something but it sounds weird like he has many voices.”

I heard him threw up. There was a short period of calmness. He wasn’t yelling anymore. He wasn’t humming anymore with that weird chants. All of a sudden, I saw him standing by the huge, glass window, all calm and like nothing happened. He was so calm that I was able to approach that window and was able to ask him the health screening I needed to do. The deputies were all amazed by how quick his demeanor changed. I wasn’t. I knew what happened and I was thanking God for His help.

The works of the devil is real but I am not glorifying the works of the enemies here. I am glorifying no one but God alone. I just know that God is there to help us win any spiritual battles we face. It’s important to don His Armor every day. We shouldn’t be afraid. God already provided us His help: we have the Holy Spirit in us. When we feel discouraged, weak, and vulnerable, just remember “Jesus”. 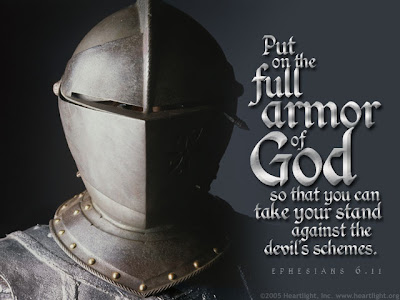 “You, dear children, are from God and have overcome them, because the One Who is in you is greater than the one who is in the world.” – 1 John 4:4