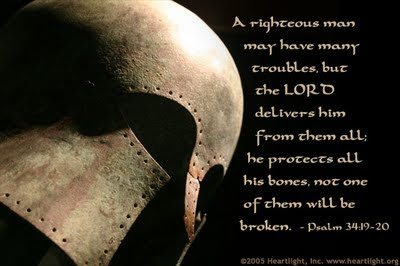 He could barely move his left elbow as this arrestee was walking into the Intake Nurse’s clinic. The swollen tissues were visible. He was wearing a white over-all, torn in different spots but what was noticeable was the left pant leg, obviously cut by the treating staff at the hospital to expose his left leg, from the bottom up to the mid-thigh area. Many bruised areas were exposed, some cuts visible. There was dried blood that oozed down his leg. He walked with a slight limp, leaning more on the right leg as he slowly dragged the what seemed to be very heavy left leg. Obviously, he didn't want to put too much weight on that sore leg.


Earlier, he was resisting arrest. He attempted to fight with the cop. But the cop was quicker than him and he got his steel baton and had no choice but to defend himself before this arrestee could hurt him, possibly, even kill him. This man just wouldn’t obey.


When the melee was over and back-up for the cop came, that man was bleeding profusely. The cops brought him to the county hospital’s ER so he could be evaluated and treated prior to being booked in the jail.


This man had learned his lesson the hard way. If only he listened and obeyed, he wouldn’t have sustained these injuries. At that time, he was calm and had been following whatever was told for him to do so. He knew he was wrong but he didn’t want to admit it. He knew he broke the law when he was caught with drugs but he denied it, despite the evidence.

We, too, are in constant melees of our own. But we don’t use worldly weapons. We use spiritual ones, for we battle against unseen enemies.


As God’s children, we know the truth that comes from knowing Christ. It is not our job to oppose that truth. Instead, we must stand for this truth at all times!


Our spiritual enemies are active in hurling the darts of lies to us. Anything they will try to kill our joy and make us paralyze from working for the Lord. Lies like:

“God is not listening to you.”

“You are not going to heaven.”

“You are a failure and can never be successful in this life.”


I can go on and on. Satan had resisted God’s authority from the get-go. He was created as the most beautiful angel but in that beauty, pride grew. He thought he was higher than the One Who created him. He still continues to resist God’s authority up to this time.


We shouldn’t be afraid of him. For we have the power that comes from Christ [Glory to God!]. In our weakness, He is our strength! Use God’s mighty weapons…


2 Corinthians 10:3-6 - “The world is unprincipled. It’s dog-eat-dog out there! The world doesn’t fight fair. But we don’t live or fight our battles that way - never have and never will. The tools of our trade aren’t for marketing or manipulation, but they are for demolishing that entire massively corrupt culture. We use our powerful God-tools for smashing warped philosophies, tearing down barriers erected against the truth of God, fitting every loose thought and emotion and impulse into the structure of life shaped by Christ. Our tools are ready at hand for clearing the ground of every obstruction and building lives of obedience into maturity.”


Ephesians 6:10-12 - “And that about wraps it up. God is strong, and he wants you strong. So take everything the Master has set out for you, well-made weapons of the best materials. And put them to use so you will be able to stand up to everything the devil throws your way. This is no afternoon athletic contest that we’ll walk away from and forget about in a couple of hours. This is for keeps, a life-or-death fight to the finish against the devil and all his angels.”


Ephesians 6:13-18 - “Be prepared. You’re up against far more than you can handle on your own. Take all the help you can get, every weapon God has issued, so that when it’s all over but the shouting you’ll still be on your feet. Truth, righteousness, peace, faith, and salvation are more than words. Learn how to apply them. You’ll need them throughout your life. God’s Word is an indispensable weapon. In the same way, prayer is essential in this ongoing warfare. Pray hard and long. Pray for your brothers and sisters. Keep your eyes open. Keep each other's spirits up so that no one falls behind or drops out.”
Inspired: 9/09/2009 06:07:00 AM 15 comments: