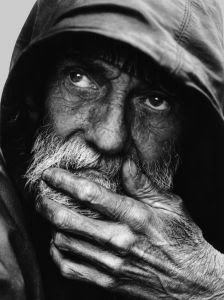 He was sleeping quietly right there on the green mattress on the cold floor. Covered with the beige blanket, he looked peaceful. He was kept in the jail's medical clinic since coming back from the hospital. He was treated for having alcohol withdrawal symptoms. Medical staff was monitoring him until he would be more stable to return to his housing unit.


Whenever he tried to turn, his bilateral feet and hands started tremoring still. But not as much when he first got sent to the hospital. His arms and face with scattered sores, hair looking disheveled, he reeked of alcohol.


Those tremoring feet had wandered miles and miles away, searching for any kind of food and any form of shelter. He would sleep under the bridge, in tunnels or other make-shift tents from cardboard boxes to fight off the cold air circulating when nighttime came. He resorted to drinking more and more alcohol as his body started craving for more and more each day. He felt good as the alcohol would keep him warm especially on cold, winter nights. 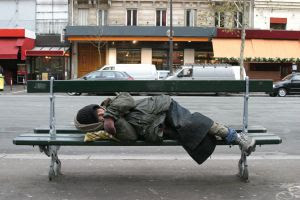 Committing minor crimes, he learned that he could have a temporary shelter when incarcerated. Warm food was provided and at least, he could shower. He didn't need to worry about where to spend the night since he would get his own bed in a cell, at least temporarily, he had a "home". Except with the stoppage of alcohol while inside the jail, his body started having withdrawal symptoms like tremors, hallucinations, or fever.

He got up, still shaking and wobbly-like, he came by the glass partition window and asked for a plastic cup. He took some water and trying to stabilize his hand with the cup, he drank a small sip, followed by another and few drops of water spilled on his shirt and on the floor.

Trying to assess his orientation to person, place and time, one nurse asked him if he knew what was going on. He gave a big, surprising answer, "I think I have Parkinson's." [Parkinson's is a disorder of the nervous system characterized by tremors and impaired muscular coordination].

It might have sounded funny but the answer only meant two things: either he was in denial that he was an alcoholic or his mind was totally incapacitated to think straight because of the alcohol's effect with his mental ability. 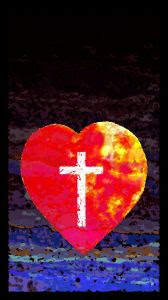 There are lots of homeless people all around us now as a result of this weakened economy. Some have mental health problems, others are run-aways. You'll see them in "skid rows", under bridges, bushes, tunnels and other places where a temporary shelter is available to keep them from sweltering heat of summer days or blistering cold on winter nights. They go from one place to another.

But wait! There is also "Someone" Who has been wanting to find a "home" in all of us. He wants us to answer to His constant knocking on our doors - the doors of our hearts. He is hurting, too, because He wants all of us to be saved from "eternal fiery destination." Sins separate us from Him, but when we open our hearts, paired with our trust and belief, He gives us a big surprise of "eternal life".

C'mon, I challenge you, for those of you who haven't placed your trust in Jesus Christ, to listen to this song. It's not a coincidence that you have passed by my site. And when you truly mean to repent for your sins, "open your hearts' doors and make them a "home" for Jesus...Stop being in "denial" that you can do everything by yourself!

Opening your heart to Jesus is as simple as saying this prayer and mean it from your heart:

"Dear Father, I admit that I am a sinner. I believe that the Lord Jesus Christ died for me. I trust Jesus Christ to forgive my sins right now. Let me start a new and meaningful life with you today. Amen."