The Graduation Ad Pic And The Ugly Spirit Of Anger


I swear…I was being given the “run-around…” I’ve been asking for my son’s picture that I mailed together with my surprise ad for their yearbook. Still…The lady’s responses, the one who managed the yearbook, sounded like “excuses” to me.

Weeks ago, she told me she would be mailing them out the following week when I first asked. Shyly. Knowing she had a lot on her plates, too. Handling not only my son’s graduation ad, but also many others.
That week had gone by. With me, waiting for each delivery. Our mail consisted of just bills or other “junk” ones. I emailed her again.

Next thing she said, the plant just mailed the pictures to her. So, she would let me know right away as soon as she mailed the picture back. That was what I asked of her anyway when I sent my payment and the words I wrote for my son.

The picture? Not a big deal to others. Because it was taken years ago. In fact, even before my son attended his first day at school in Kindergarten. But when I took that, I remembered his patience when I surrounded him with all of his “Hot Wheels” cars as I placed the 2 bigger car models on his tummy. Oh, how he laughed! As he began to understood why I did that. Mommy wanted to take a picture of him because his passion for cars was shown early in his life. He was barely 3 and he could already identify the year and the models whenever we were on the road or watching t.v.

Yes, that old picture meant a lot. Not only to my son. Most of all, to me and my husband. As my son, who is an adult now loved creating car models as an aspiring Graphic Designer...That was the first picture that came to mind when I didn’t know which one was appropriate to go with the grad ad. As I prayed, that picture showed up in my mind. And I remembered the laughter. His patience. His enjoyment. That simple pleasure. Now, a memory. But priceless…

I told the lady I hated to keep bugging her. Usually, she would respond right away. Yesterday, it took the following day, which was today and it seemed like she was upset that I kept asking. She even gave me the tracking number. Because her reason was the pictures were coming from Canada and only this Friday, tomorrow, not last Friday, they were expected to come.

The spirit of anger pushed its way in quickly in my heart and mind. The “old me” wanted to say many things.

“How dare for her to be upset! That’s not right! I am the customer!” One by one, ugly words started filling in. It was suffocating me as anger tried to consume all of me. Even in my sleep. I woke up and found myself praying. I asked the Lord to help me. To reply in ways that would please Him. Because I should know better. He didn’t want my “old me” to respond.

So, calmly, I slowly typed each word. I told her had she been more specific about the date of that “Friday” when the pictures were supposed to be returned, I wouldn’t have emailed her yesterday. I told her, I didn’t need the tracking number. I just wanted my son’s picture. And it would have been nicer if they were clear about how long it would take for their company to start sending mailed pictures to parents. Even before we paid for the ad.

I hit the “send” button. Trusting in His hands to move. I wouldn’t let this ugly spirit of anger to take any roots in my mind and heart. I knew. That was what He wanted. I died long time ago. So that I could be a “new me”, living a life with Christ. But I asked for His forgiveness. In case I judged her for being upset.

The response from the lady was quick. But it was very much apologetic in tone, with appreciation and gratitude at the same time. She explained what happened in details and apologized for not being clear and causing the confusion in the first place. Then, she told me that she would take my advice. To let the parents know next year about the time frame of how long the pictures would be mailed back after the yearbooks would come out. Even better, she said she would email the other parents waiting, too, like me, that the pictures were supposed to be coming from Canada and would arrive tomorrow.Like...right at that moment...

I cried. I never cried that long in a long time. I felt the Lord’s reassurance at that moment. For trusting in His works. In His perfect timing. In His ways. And I felt something was released from my spirit. The spirit of anger that shouldn’t reside and shouldn’t have any room in me. As His child.

I cried even more, as I opened my daily devotion in my phone and the verse was “In your anger do not sin”: Do not let the sun go down while you are still angry, and do not give the devil a foothold.”
-(Ephesians 4:26-27, NIV) 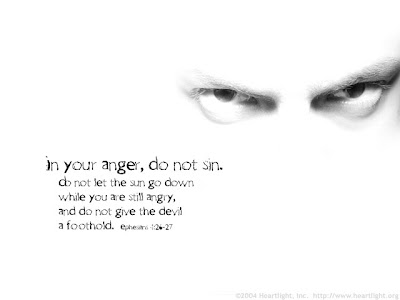 Suddenly, I thought about my father. When he was dying, lying on his sick bed for a couple of weeks, dying of cancer, begging God to take him as the physical torture and pain from this disease was wearing him down day and night… He dozed off, only to suddenly open his eyes and called me in haste. He thought I was not in his room. I never left him, always next to him, along with my 3 brothers who also visited from miles away.

In a whisper, he called me, “Rosel… The Lord told me…It was not my time yet to go Home…Because I need to forgive those I haven’t forgiven…”

His Word this morning rang even more true.

The spirit of anger is like cancer that can take a hold of our emotions and everything. It’s indeed ugly. This is a sin. And any sin does not have a place in His Kingdom.

With my tears flowing, I shared this story with my son this morning, as my mind prayed, “Lord, help us…To be angry only when it’s right. But not to let it take a hold of our hearts and minds before the day is over and most of all, before we die…”

I emailed the lady. Again…To thank her for her explanation and apology. That despite the confusion, we both learned from that.

Because nothing should ever hold us back. By His power, we are the ones who can take a hold or control things. As long as we surrender…have faith…and believe… Because the “old nature is gone”, the real “us”…But with Christ and only in Christ alone, we are new!!!
Inspired: 6/13/2013 03:34:00 PM 8 comments: