“Can two people walk together without agreeing on the direction?” – Amos 3:3 (NLT) 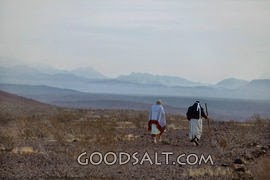 I couldn’t believe what I was seeing. There was a new, long bridge and I couldn’t find the train tracks anymore where a long train would pass by. It would run at the slowest pace with its miles of cars linked together. I used to wait…And wait…Until I only had a few minutes spared to be in that rehabilitation center on time.

My confidence to relieve the evening nurse a little early, actually, the day nurse, who volunteered to stay until I  got there, was slowly fading. Swallowing a sip of water, I decided to make a phone call and had advised her that I felt I was lost and made the wrong turn to this unfamiliar road that led to a huge, commercial building on one side. Yet, I couldn’t see the prison. She started guiding me. Reassured me it wasn’t my fault because the direction from the bridge had a confusing sign that many at the beginning also made that wrong turn. She was excited that I had been chosen to float there. And in that short reliving of memories, I found the old, long road that brought me back many shifts I had gone through. All by myself then. But now, they have some help with an extra LVN to be able to accomplish more tasks like passing meds and checking blood sugar levels of many inmates who had health issues.

I was usually a calm person but I had to admit, I was startled when a female deputy was watching me from a dimly lit guard house on my left corner as I was trying to figure out what to do on a nearby phone for someone to let me in. She seemed to be enjoying the whole show. Of watching a confused nurse who didn’t know where to go and how to be let in. She motioned for me to a particular gate. I cracked a smile and thanked her and told her I used to work in that facility for many years. Except…everything seemed new to me.

Our main prison was back to its old problem. Of having staffing shortage. With both RN’s and LVN’s. Everyone seemed to  be getting burned out from either working extra or doing more work than what they were expected to. Sometimes, the choice was forgotten. One just had to do a particular task. Whether they liked it or not. Health care of incarcerated inmates was always the priority. No matter what.

The LVN who was working with me that night was previously working with us at the main detention. I hadn’t seen her in years. But I remembered her well... Dedicated to her work and always helped out the whole crew if there was a need. But that was how our crew was. Always helping each other. Sharing stories and with the comfort of gathered meals brought from home at quiet times, we all had  great working relationships that worry was out the door on those busy nights.

We hugged each other. And throughout the night, she patiently showed me around and where to get the things I needed if any medical emergency arose. By dawn, she invited me to go to the north side. Where they housed the inmates with minor violations. I remembered it was a tough ride in the provided car. It had to go up a dark hill, where many jack rabbits often crossed the road unexpectedly. Rumors were flying that rattle snakes abound. Proven when an inmate was bitten on his foot. Back then, inmates were allowed to roam. No one would dare to escape. For they knew, there was no place to go to as it was surrounded by miles and miles of barren, parched areas.

What a change it was for me! To see two deputies than just one guarding now all the inmates who were locked in. She gave the medications to a particular inmate and back to the parked, service car we went.

“Isn’t it beautiful to see those stars shining and be able to to see the beautiful sunrise. You know, I enjoy that every morning…”

I was gazing at her the whole time she was holding on to the steering wheel and occasionally looked up to marvel at the heavenly bodies she described.

I saw her patience, her sincerity in welcoming an old working relationship be brought alive. Her passion to serve the inmates and be harmonious with the other custody staff. Her ability to see the beauty despite the barren area surrounding the old rehab center. I knew…

Her light was more beautiful than those stars. Shining ever brightly and untiringly doing its purpose.

How I prayed…to always be in near proximity to the Light and be able to reflect Its radiance. For all to see. Such a simple beauty. To see even a tiny light bring peace and joy in dark, remote areas.
Anyone can accomplish that…by walking with God. In harmony. And in intimacy shared day by day. To know Him, to please Him. For Him to become one’s heart’s desire…

“Thank you for being patient and teaching me things here that are new to me. I know…I’ll probably be sent back. But I will always be willing to float here.”

“Let us go right into the presence of God with sincere hearts fully trusting him. For our guilty consciences have been sprinkled with Christ's blood to make us clean, and our bodies have been washed with pure water.” – Hebrews 10:22 (NLT)