You Are Beautiful Blessing 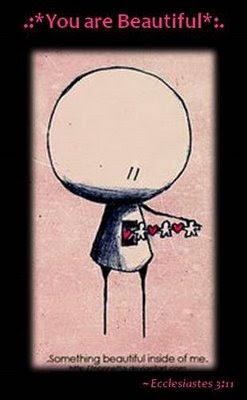 Today, I was busy running errands and just went to check my emails and comments that I appreciate so much from blogging friends, when sister Heather surprised me and other great bloggers by creating this "blessing" and giving it to us. I thought that was just so sweet of her, to take her time to create this and give it away.

Sister Beautiful Self writes with so much passion for the Lord, and she deserves this blessing, too. I guarantee you'll be blessed by her posts, the way it always blesses me. Please visit her and know more about her. She is a beautiful person inside and out! Times that I need a lift, her timely funny posts crack me up! Her post about her "madre" when she introduced her to us touched me the most. I was so touched with the way she had shown her love and honored her mom.

Writing is one way I can give something back to the Lord and He surely blessed me with so many brothers and sisters in Christ who are so "on fire" to write for His glory.

I want to be able to share this blessing, courtesy of sister "Beautiful Self" to all of you who deserve it, too. You are all beautiful that you tirelessly share God's love, encouraging us and leading others to know His grace and mercy, through the words you write. So, please feel free to grab this blessing and share it, too with others you want to share it with.

I just want to thank the Lord for people like you I had met in such a short period of time. I'm so blessed and honored to have known you guys. To God be the glory always. May He bless you all and may we continue that "unity" that comes from His perfect love. God bless.
Inspired: 5/14/2009 10:02:00 PM 5 comments: 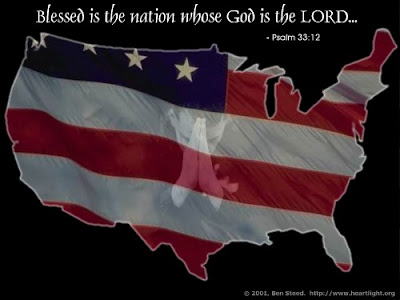 I kissed my husband “goodbye” as he walked out the front door. “Pray! Always pray!,” I added as I saw him nodding.

“I always do,” he replied. Sleepily, I walked back inside the house and ascended up the stairs. I said a prayer for him and the other officers working with him.
It was another day of rounding up criminal illegal aliens. They knew who to get. They knew where to go. Sacrificing their lives everyday, there was just no way telling of how these illegal residents would respond to their arrests. They could be hiding weapons. They might fight back.
My husband and his co-workers are not new to sacrificing their lives. They were once serving in the military to fight for this country’s freedom. And now, they still do. They want to protect this country because we love this country, its liberty, its equality. A country whose Founding Fathers attributed everything for God’s glory. To most of us, they are “patriotic”. Not until modern political liberalism had dominated the seats in this government.
Have you seen that video taken when Nancy Pelosi was addressing a group of both legal and undocumented residents in a church, calling them patriotic?

I just have a problem understanding that. Because an illegal alien is someone who is unlawfully residing in a country or without that country’s authorization. In simple words, “he or she broke the law, either by over staying after their visa had expired, came in without a visa, someone who came in with fraudulent documentations or maybe someone who committed a crime, was ordered to be deported but failed to leave.
Ms. Pelosi had said that “it’s not right for their doors to be kicked middle of the night and have a parent taken away.” The officers don’t just take them away. They leave one parent if there are no other adults to care for the young children. If it’s only one parent, Social Services is called to take care of these children. Sometimes, the adults are not taken away but are told directions of what to do next to make sure that the children are taken cared of first. That’s hard to watch your own government official bashing the law that should discourage unlawful entry or stay.
If someone who broke a law is called “patriotic”, what makes that of the officers from Homeland Security, the military, and other branches of government who sacrifice their lives to protect this country against criminals and terrorists?
The fact is that "modern liberalism" seems to cater to what will be good with their political agendas, rather than doing what is right in God's eyes. They even challenge the faith that had formed this nation of liberty. They see all religions as equal.
Liberalism can be like “the attitude that says diversity is always good, truth is negotiable, and every opinion is equally valid.”[The Case For Real Jesus by Lee Strobel, page 34].

“What has happened in modern liberalism is that the Christian ideals of liberty and equality have been divorced from their Christian context, emptied of their Christian meaning, and distorted into something they were never intended to be. In Christianity, God’s glory is the supreme good. In modern liberalism, liberty and equality have become the supreme goods – now, men are to be free – not to serve God, but to pursue their own desires. Now, men are to be equal not for the sake of justice, but in the interest of individuals and class envy.” [A Warning Against Modern Liberalism by Samuel E. Waldron; Truth for Eternity Ministries; 1998].

We need to pray for all of our leaders, starting with the President. Not only the Liberals but for everyone serving this beautiful country, "a nation that is under God" whose leaders seem to be turning away from Him.
We know that only if we humble ourselves and pray and seek the Lord’s face and turn from our wicked ways, then the Lord will hear us from heaven, forgive us our sins and heal our land [2 Chronicles 7:14]. Please don’t forget the ones sacrificing their lives every day for our freedom! For all the saints working for His Kingdom. For the true meaning of liberty that is from God! To Him be the glory!

Whether you agree or not, I respect your opinion, so feel free to comment. This was intended to request anyone who wants to pray for our leaders to turn to God. God bless.
Inspired: 5/14/2009 01:57:00 AM 9 comments: