We Were Not Just Co-Workers

"Come with me Rcubes," invited the supervisor who had to leave early and upon my workmates and my insistence for her to leave after receiving a frightful phone call.She needed to go straight to the hospital where her father had been in for many months now and not doing well.

"Would you please give this to Nurse E. and Nurse H. and oh!" as she grabbed a small package filled with goodies I could tell she made, "This is for you..."

"Drive safely C. and please, let us know if we can help you with anything. Be strong."

She took a few steps closer to me and with the freezing atmospheric breaths blowing upon us, she initiated a hug.

Careful not to be taken as a special favor when I first walked into the Clinic, I gave her the same chocolate candies I had ready for everyone working with me last night. As I had been going through a tough battle against many people in higher positions, I was careful not to treat her as if I wanted a favor from her, being one of our supervisors.

"Merry Christmas!" as she got up and gave me the first hug inside the Infirmary.

She had been calling in sick a lot. When I first heard about her father being very sick in the hospital, it brought many mem'ries of my own as my father was longing to go Home after being diagnosed with Colon Cancer. I could imagine the physical and mental toll this illness had not only on her father but on herself. She was one of our supervisors. Tired of those supervisors who backstabbed their own crew, she was careful not to do that. I remembered she would talk about her oldest son and how he would pray whenever something went wrong. There were nights when we were not too busy and she spoke about the Bible and God and spiritual enemies.

I let my cautious walls around me fell apart as she approached me with open arms after instructing me about her gifts.

"Merry Christmas again and I pray that you will remain strong," I uttered as I enveloped my arms around her.

And in that short flash of moment, I knew we both had let our differences disappear.

Yes, we differed in so many ways and sometimes even clashed with our attitudes. But one thing remained true, we were both in need of strength, hope, peace and joy in our hearts despite the many trials we encounter. The kind that only would come from God. The gifts from the Father we both knew and loved and Who found us both when we were walking astray at one point in our lives. She knew my battle. I knew hers.

There we were in the well-lit staff parking, as if time froze on us and I knew our hearts both felt the comfort and strength and sincere love that only would come from being a part of God's family. It might be just a "simple hug" but we knew that it became a source of strength and comfort knowing we were not alone in our battles.  Suddenly, I didn't see her as a supervisor anymore as she said "Bye." And with the tone of her voice, I knew she didn't treat me as just a "co-worker below her."

I just knew...our bond was more evident. The bond of unity that only would come from God's merciful hands. We were not just co-workers. We were sisters in Christ's family. 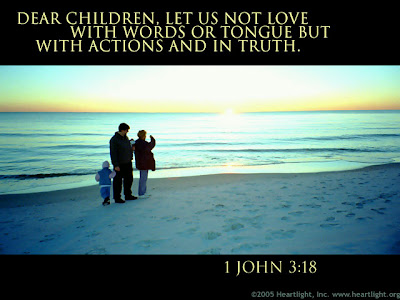