The golden badge flashed before our slumped, tired bodies as we neared the end of our shift. Warning the nursing staff that he, the deputy, brought the inmate I asked for to be evaluated for his suicidal ideation, his eyes scanned around until he found me sitting in front of a computer monitor in a corner.

“Thanks, deputy, for bringing him. I appreciate it.” I hollered as I knew that as the medical staff’s shift became slow at those hours, the deputies’ were just beginning again with many activities they needed to accomplish before they finished theirs.

There he was…Sitting on the last chair. His stare…blank on the cold floor and he slowly raised his what seemed to be a very heavy head to acknowledge my shadow approaching near where he was. His affect…Flat. His stare… Exhausted and glistening with tears awaiting to fall in the corners of his dark eyes. Exhausted from many a ‘sleepless nights’ and that darkness that encircled his eyes. Darkness that also extinguished the light of joy that once was dancing in his heart…

“Sorry…I had to ask the deputy to bring you here. I was concerned that you sent us a sick call request stating that you wanted to hurt  yourself. Did you write this? And if you did, do you want to hurt yourself?”

Like a scared puppy with sad eyes, he acknowledged he was the one who wrote the request. Except…it wasn’t true that he wanted to commit suicide.

“I am depressed, Ma’am…I feel it’s getting worse…I’m sorry if I made it sound like I want to do that. I only did that because other inmates told me that was the fastest way to be seen by the Psych Doctor and to get meds if I wanted to.”

I tried not to interrupt as my suspicion was being proven to be true. That others told him to do so… The unit deputy briefly looking to where I was as he knew I had told him what I suspected about that request…

“Then…I realized…I won’t do that. I can’t. That’s their game. It’s stupid…To lie like that…Ma’am, my dad passed away and that’s why I’m feeling like this…We’re very close…I know…I won’t make him proud and that’s disrespectful to him if I listened to those inmates. They lie to get what they want…I’m sorry…”

I kept maintaining meeting his stare, avoiding to even blink so as not to miss his honesty being given. Finding the skills learned from years working with suicidal inmates and those depressed ones,  my mind was busy remembering the friends who lost loved ones and that of my own. Of losing my own father 7 years ago…To try to find a commonality to help me speak with this depressed man in front of me so I could help him see that I truly understood where he was coming from. I knew…The loss was hard to bear. Grief was a process that has no end sometimes. It could be a long duration a broken heart has to bear. Each day. Each long day. I was also looking for cues. For any sign that would help me make sure that he wouldn’t do nor plan a quick escape from this pain. That was the hardest thing to spot of all.

“Don’t apologize, Sir. I appreciate that you told me the truth behind your sick call request. The inmates were right. That was the fastest way to get attention. But they were wrong that doing so would guarantee you getting medications. Because it all depends from what the Psych doctor would want to order. Or not.”

“But you’re hurt. I could feel your depression. What you’re going through is true and very painful. And no one can say ‘You’ll be over in no time.” Because the truth is…No one knows how long grieving lasts.”

“I can wait…I’ll wait for the Psych doctor to see me. I know I do need help.”

“Do you believe in God” I uttered loudly as the deputy wondered where my probing was leading to.

“Do you feel like talking with a pastor would help you?”

Silence…Then the deputy asked if he could interfere.

As I nodded, the deputy said that the inmate already asked for the Chaplain.

“I think you know, Sir what process to take. I’m glad you’re choosing to be patient and not listen to other ill advices. I’ll make sure that the mental health services will see you first thing come Monday.”

He thanked me as he tried to paint a smile on his haggard face. But no smile was ever painted by the brush of his broken heart. Tears grew as they remained ready to flow. Tears brought about by the news of losing his father who loved him dearly and the long incarceration he had to endure behind the bars.

I thanked the deputy as his golden badge glistened but quickly faded as he turned to help the inmate stand up. With his cuffed wrists, he slowly rose with heavy, drooping shoulders. His head remained looking at the floor as he took heavy steps back to his unit.

Then I saw the invisible badge. The badge that this depressed, Christian man was wearing…It spelled: 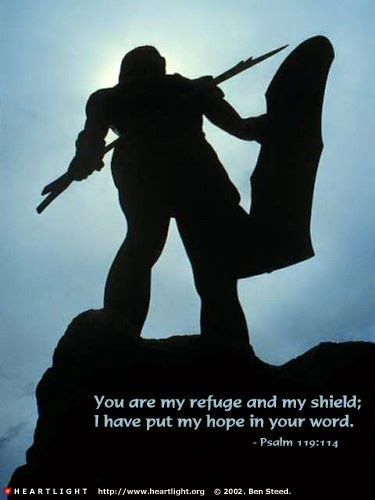 For that Christian inmate…For God to help him draw his shield close…His shield of faith…Close to his spirit. Faith that would help him cry out unto God of Armor…So that he would be able to endure…Up to the end…And have His “joy” reclaim the lost areas in his heart that was lost to Satan’s arrows…
Inspired: 5/26/2014 08:55:00 AM 3 comments: