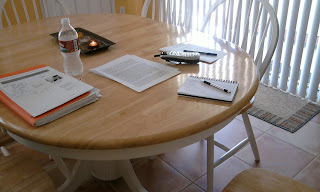 I let a sip of water touched my parched mouth as I waited anxiously for a phone call scheduled at 1:00 in the afternoon specifically. I reviewed a mountain of paper works in front of me over and over. The more anxious I got when I scanned every piece. I glanced at the clock on top of the mantel. I had a few seconds to go. It was not easy to refresh the memory as I re-lived all the events, all the lies spoken to me, all the accusations that had no basis, all the intimidation and all the plans that had no purpose but to worry me and forced me to resign.
“How could I relate the events that occurred in a span of 8 months to only a few minutes as that phone call would only take a few minutes to an hour?”
I searched for His advice in the midst of this chaos. He was always the only One Who knew how to calm my fears and worries. He was the only One Who knew the deepest part of my heart and knew it all.
The truth of the words cried out before God thousands of years ago were mimicked by mine:

“No one can oppose You because You have the power to do what You want. You asked why I talk so much when I know so little. I have talked about things that are far beyond my understanding.”
– Job 42:2-3 (CEV)
The anticipated phone call came. I made the person on the other line confused at one time as it was difficult to relate the events that took for so long in such a restricted amount of time with him. He understood. He heard it all.
“Go ahead and send me all the papers from your work,” was his last statement.
I sought advice countless times with the Advocate Who knew everything that had transpired. Though my desire to pursue in bringing charges against some powerful people was not the ultimate desire, I had to. I did not want them to do what they had done and continue to do with those who seemed to be powerless in their sight.
They took my silence as ignorance and lack of knowledge. They were puzzled as I returned their harsh words and evil plots with kindness and respect. They did not know that during those times they wounded me severely, I was being cared for by His pierced hands. I was being comforted by His unconditional love. I was being strengthened by His power and might. My tears He wiped. The unseen motives, He gave me discernment.
They were quick to bring charges against me. They did so many things that gave me little room to decide and subtly, wanted to force me to quit my job. They said so many words that were unfounded. But their plans would not go that far. They change my job status that benefited me more. I have more control now with my schedule the way I want to, when I want to, not the way they forced me to move to another shift and gave me a hard time every time. But even in those perilous times, I never said anything. I did the expected work with the best of my strength. I did it because He helped me and sustained me with His power and grace. They did not know that.
They brought charges against me who had not done anything. I worked well with all of my co-workers. I never slept at the job. I never complained when work assignments were given to me even if they were not expected to be what I should be doing. I always arrived on time. I was never on discipline.
It will be a long process. But I am the one to turn the table now. I am bringing charges against them. I pray they have good reasons for everything they said and all the plans they created. In all of this, I pray their hearts will turn to God for help.
“31 So what should we say about this? If God is for us, no one can defeat us. 32 He did not spare his own Son but gave him for us all. So with Jesus, God will surely give us all things.33 Who can accuse the people God has chosen? No one, because God is the One who makes them right. 34 Who can say God's people are guilty? No one, because Christ Jesus died, but he was also raised from the dead, and now he is on God's right side, appealing to God for us. 35 Can anything separate us from the love Christ has for us? Can troubles or problems or sufferings or hunger or nakedness or danger or violent death? 36 As it is written in the Scriptures:
"For you we are in danger of death all the time.
People think we are worth no more than sheep to be killed." — Psalm 44:22
37 But in all these things we are completely victorious through God who showed his love for us. 38 Yes, I am sure that neither death, nor life, nor angels, nor ruling spirits, nothing now, nothing in the future, no powers,39 nothing above us, nothing below us, nor anything else in the whole world will ever be able to separate us from the love of God that is in Christ Jesus our Lord.”
- Romans 8:31-39 (NCV)

God can also bring a charge against disobedient people. When He does, are you ready for that?

"1 The Lord has an accusation to bring against the people who live in this land. Listen, Israel, to what he says:
There is no faithfulness or love in the land, and the people do not acknowledge me as God.2 They make promises and break them; they lie, murder, steal, and commit adultery. Crimes increase, and there is one murder after another.3 And so the land will dry up, and everything that lives on it will die. All the animals and birds, and even the fish, will die." - Hosea 4:1-3 (GNT)
Inspired: 8/31/2011 08:28:00 AM 7 comments: