The Lord is Close... 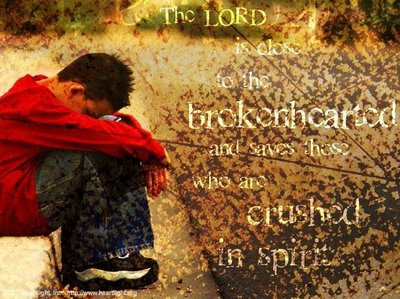 It has been a year now that my father had passed away. I miss him daily. I miss him then when he was still here with us physically, because many miles of oceans had separated us.

There is a saying that sometimes, you won't know the value of something or someone you love until you lose it. It's not true in my case. I know that I will lose someone so great, even before I lost my beloved father.

You see, my father always love to joke around. He makes people around him laugh no matter what circumstances he's in. When he came to know Christ and accepted Him as his Savior, the more joy he shared with those who had loved him and learned to love him like their own father. He loved to share whatever things he had specially with the needy ones.

Joy is not something we can create. It is a special gift that only comes from God. It is having that feeling inside that "everything is and will be okay" despite the turmoils or any difficult trials around us. The whole time [2 weeks] that my siblings and I were with him, we talked a lot with our father, shared so much laughters and reminisced many warm memories we shared as a family and when our loving mother was also with us.

One night, looking more tired and ready to go home to the Lord, as we [his loved ones] surrounded him on his bed, he started asking my siblings and I, one by one. He wanted to know if we had any special requests and he said that he would personally deliver it to the Lord. So to make him happy, we tried to say anything though what mattered to us was his comfort.

He closed his eyes and placed his skinny arms on his chest as if he was preparing to see his Savior. Tears started running down our eyes, as we took turns hugging him and kissing him and we kept saying "I love you dad, and thank you for everything." His breathing started to become more shallow and slower. But his mental state was very alert and oriented.

After 5 minutes of us intently looking at him, preparing ourselves for his "departure", he suddenly opened his eyes and out loud spoke, "God will be angry!" My brothers and I looked at each other, thinking "was he confused?" But as he was talking, we knew he wasn't. So, I asked him, "Dad, what do you mean God would be angry? With who?"

He looked at me as if I was supposed to know the answer and said, "Yes, God would be angry with you guys because you have too many requests!"

The tears of sorrow turned to tears of laughter. My brothers and I were talking with our eyes as if we were all saying in unison - "That's dad!!!"

The Lord granted few more weeks for us to be together. How I treasured that! Lord, thank You for being close, specially at times when we feel so alone, so scared, and when we are hurting. Help us draw closer to You...

Zephaniah 3:17 -"The Lord your God has arrived to live among you. He is a mighty savior. He will rejoice over you with great gladness. With His love, He will calm all your fears. He will exult over you by singing a happy song."

My son's passion is to design his own car. He loves cars since he was a little boy. He had made a movie showcasing a car he particularly designed and worked on for a few days. Beaming with pride and relief he had finished it, he asked me this morning, "Mom, do you have time to look at the car I did?" He knew we have little time in the morning when he has school. I replied, "for you, yes, my son, I will always try to find time. I will drop anything I'm doing."

Immediately, I have this sort of like "conviction" from the Lord and I felt I needed to share it with my son immediately. I asked him back, "son, can you imagine us asking our "Daddy" [the Lord] if He has time for us? What do You think would He say?" Without blinking and without much thought, my son goes, " I think He'll say.....I have eternity..."

Then, I asked him again, "well, what would our answers be if the Lord asked us, "Child, do you have time for Me?"...We both got quieter...But I knew in that silence, we were thinking the same thing...We must learn to set our priorities and not forget to spend time with the Lord.

Thank You Lord, for reminding us in quiet ways, how important it is for us, to start the day spending time with You. Lord, please forgive us that we get caught up with the hustle and bustle of daily lives and we forget to make time to talk with You. Help us set our priorities daily, Oh Lord, starting each day in seeking You and Your heavenly wisdom. Thank You for Your presence in our lives and we know Your time doesn't end here in this lifetime, but it surely lasts for eternity. What more can we ask for oh Lord if we have Your love and presence with us?Thank You for Your love, Father.

Matthew 6:32-34 -"For the pagans run after all these things, and your heavenly Father knows that you need them. But seek first His kingdom and His righteousness, and all these things will be given to you as well. Therefore do not worry about tomorrow, for tomorrow will worry about itself. Each day has enough trouble of its own.

Colossians 3:2 -"Set your minds on things above, not on earthly things."