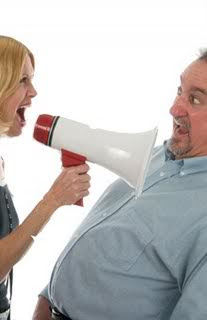 “It is better to live in a desert land than with a quarrelsome and fretful woman.” - Proverbs 21:19

“Ladies, please lower your voice or remain silent,” I requested as I was doing the blood sugar checks on the female side.

The din of early morning chats was reverberating way much, being in that tiny waiting area as a throng of about 12-15 diabetic women, of different ages, gathered from 2 different units. The sign: “No Talking!” was brightly posted on one of the walls but always was clearly ignored. I usually never got upset. But when I try to give them the “hush-hush”, it was also for safety as sometimes, some of them would try to distract me from doing a particular accucheck.

They knew me by now that I was one of those careful not to be distracted. In an instant that if they would become successful grabbing my attention, someone could easily steal needles or other things. A dangerous way of accumulating objects that could be improvised to process for a weapon. I never allowed them to do the accuchecks by two’s, despite us, having a lot of machines. I only tried to call them one by one. Lesser distraction, and no chance of mistakes on my part when administering their insulin doses.

The Bible cautioned women not to chat way too much! Or not to NAG! Can you imagine seeing a husband up in an attic, hiding there, than to be with his nagging wife? [Proverbs 25:24 - “It is better to live alone in the corner of an attic than with a contentious wife in a lovely home.”].

Nagging will do us, women, no good. If we can’t be peacemakers at home, how can we be away from making troubles in the community? Nagging does not help in a marriage. It is one of the reasons why marriages break up, too. We can all learn from the godly qualities of the Proverbs 31 woman. But “fear of the Lord is the beginning of wisdom”. [Proverbs 1:7]

So, let us be careful before we even speak. But only let those words that help build others up [Ephesians 4:29]…Check out this news from Italy. Nagging was the reason why this man chose to be in prison than to be home:

An Italian crook begged to go back to jail after telling wardens life behind bars was better than living with his wife again.

Prison bosses had freed Luigi Folliero, 45, to serve the second year of his two-year sentence for theft under house arrest.

But after just 2 days at home, he fled back to Ponte San Leonardo jail, near Naples, and pleaded to go back in his old cell because he could not stand being at home with his wife. He told wardens: “She never stops moaning and nagging.”

I don’t know about you, but I don’t want my hubby to coop up in the attic!