The road going up was winding, dark and sometimes, small creatures dashed across the dark road, unknowingly risking their lives to my moving vehicle. Fortunately, with my headlight on a high beam, I was able to avoid them. The usual time of 4:30 in the morning marked this usual trip on an unfamiliar road. On my passenger seat, a plastic tub sat where the inmates’ medications were housed in individual, small orange envelopes. Those meds were delivered to those many bodies who committed minor offenses. There was only 1 deputy. And in that particular housing, separated far from the rest of the rehabilitation center, roamed many inmates.

I parked my car under the soft glow of a little light at the back. I saw some inmate workers already roaming at the back, waiting for the delivery of their morning chow from the prison’s kitchen. All eyes glued to my arrival, watching my every moves. The deputy was not visible, busy inside, starting to wake up the still asleep inmates.

Those happened many years ago. As I thought about it now, I often wondered why I remained courageous doing that uneasy feat. Co-workers admired my courage, working alone in that facility for many years. Working in the dark of the night. Being in a remote location, nature has its way of surprising the staff with its wild ways. Coyotes abound. Snakes lurked somewhere in those dark holes, ready to attack if felt threatened. Squirrels came to try to sneak in a few crumbs they could find laying around the building where staff ate. There was also a sighting of a mountain lion once. Flashfloods came without warning on those rainy days.

But the reality of having inmates freely roaming around was the biggest threat that lurked. Knowing they were unpredictable with their behaviors, despite being rehabilitated. I intentionally set my car’s alarm every time I made that morning delivery. So that nobody could hide under the hood. I wasn’t afraid then. I wasn’t afraid now.

Looking back, I know, I have nothing to brag about. I had confidently worked in that fearful [to others] environment because my confidence came from knowing Jesus. My competence came from Him. I know that those inmates might have different opinions of me, some grateful for the meds I gave, some angry if their meds had not gone through our system yet and so was not delivered on a particular day. But with or without meds, I fairly treated them. To some in doubts, I explained how our medication system worked. Respecting them, no matter what attitude they showed me was what earned me their respect back in the end.

It was through my actions that I hoped they would see and be able to read Christ working in me. Because as believers of the new covenant, we are Christ’s letters. 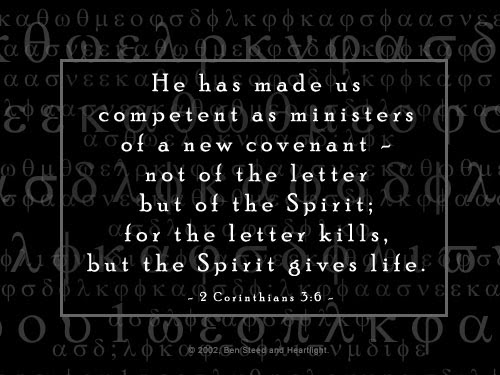 “You show that you are a letter from Christ, the result of our ministry, written not with ink but with the Spirit of the living God, not on tablets of stone but on tablets of human hearts.” - 2 Cor. 3:3

We have no credit for our transformations. Yes, we thrive. We remain strong. We are able to endure no matter what circumstances are going on around us. We set examples of what righteous living mean. It is not our work but of God’s spirit. When that seed is planted, we have this new power to live only for Him.