Nearing our night shift yesterday morning, I got up from where I was sitting to help my co-worker who was assigned to see an inmate being wheeled by a deputy on a guerney. This inmate was complaining of “severe dizziness”.

His medical history recorded how he just came back from the hospital couple of days ago, treated for ingesting an illegal substance and for dehydration.

The balls of his eyes were constantly rolling upward as he laid his head against the thick wall. As I approached the other nurse, she looked unsure of what next step to do.

“May I help you with anything?,” I asked her.

“Check this out Rcubes. What do you think? He’s so dizzy but all his vital signs are normal. His blood pressure is a normal high,” she answered.

Hearing that the vital signs were normal, especially the blood pressure, without any other known medical conditions, I already had a gut feeling that this inmate was faking. When dehydrated, blood pressure usually dips down as some of them don’t drink enough water in the prison.

“Nurse Rcubes, this is legit!” commented the deputy.

“Hmmm…I wouldn’t say that yet,” I replied as I made some head movement suggesting he was not sick.

He looked at me baffled why I didn’t believe him when he saw everything when he went down on the floor as he tried to walk in his unit.

“Have you tried doing a postural blood pressure readings?” I suggested to the other nurse.

“You’re right! Now, we’ll know for sure!” she exclaimed as the male inmate slightly opened his eyes and wondered what I meant for that kind of test. He started rolling his eyes again. There was no nausea nor vomiting. We told him to get up. Leaning upon the walls, he walked in a slanted position and down he fell on the floor, his head almost hitting a big trash bin, but he immediately avoided it. The 2 deputies immediately ran to help him get up. I just smiled and didn’t say anything. I knew the other nurse saw me and felt why I just smiled and didn’t seem concerned a bit. The deputy still looked at me and wondered why I wasn’t doing anything to help this inmate.

All the blood pressure readings and the pulses were not widened. They were all normal as I started giving the report to the daytime nursing supervisor. We decided to keep him in the back cell until the jail doctor arrived. Not saying anything yet to the supervisor, except the blood pressure readings, when she saw the inmate got up and pretended he would fall again, she uttered loudly, “Oh my God! I haven’t seen any drama like this!”

And the deputy looked at me and finally got it that I was right about this inmate faking the whole thing. He wasn’t dizzy. He wanted to go to the hospital so he could be given something for his drug seeking habits.

We don’t need to believe everything this world says. Our beliefs and faith in One true God Who is the Truth would help us discern the lies this world brings. This world is ruled by our spiritual enemy Satan and his angels. Everything he wants is to keep us, believers apart from God’s truth. His goal is to deceive everyone. Proverbs 14:12 - “There is a path before each person that seems right, but it ends in death.”

But Jesus said to the people who believed in him, “You are truly my disciples if you keep obeying my teachings. And you will know the truth and the truth will set you free.” - John 8:31-32

I have learned from this life’s journey that some things in the past will not help me to keep pressing on, the future I’m completely unaware of what’s to occur. But He does. I have no option but to look up and know that His ways and thoughts are truly higher than ours. What this world says, I don’t believe because the enemies are making sure to try everything to thwart God’s purpose in my life. But thanks be to God, I [we] have His mighty power and might, His armor to wear to guard me against all evil ways.

“So humble yourselves before God. Resist the devil and he will flee from you. Draw close to God and God will draw close to you.” - James 4:7-8

I enjoy watching cloud formations on different days. But lately, I have been noticing clear, cloudless blue skies. As I was sweeping the leaves in the front yard, I took this picture because it reminds me, aside from the truth that He is higher than us and that He knows and sees everything, God is not God of disorder but of peace. [1 Corinthians 14:33]. He is God of clarity... 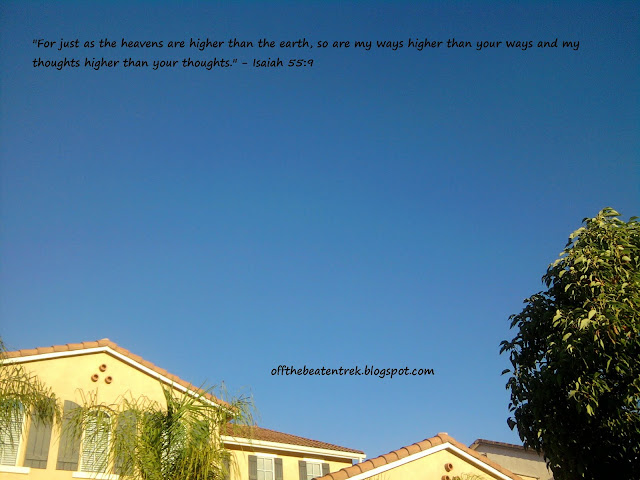