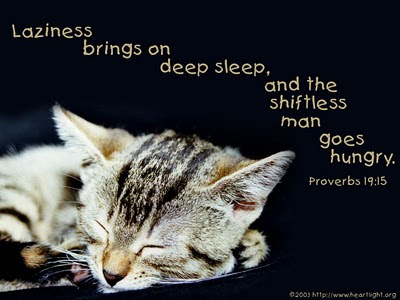 "Laziness is nothing more than the habit of resting before you get tired..." ~ Jules Renard

I was trying to prepare my stuff together as I counted the slow 15 minutes before my shift was over. Then, the kitchen deputy showed up, bringing an injured inmate who was hobbling his way into the Clinic. The chart was given to me.

“I was lifting a milk crate when I accidentally dropped it on my right foot. It hurts so bad right now,” a young male inmate answered, grimacing as he spoke.

“Remove your right shoe so I can see.”

Slowly, he tried to slide off the blue, soft shoe as he bit his lips. On top of his right foot, redness and tenderness were visible and palpable. He could barely move his toes because of the pain.

Prior to talking with him, I had read his chart to get familiar with him. He was one of those inmate workers, working in the kitchen from 12:00 midnight to 12:00 pm. In his chart, he had a prior claim of feeling depressed. Except his reasoning was because he didn’t want to be there [working].

God only knew if he dropped the crate accidentally or he did it on purpose to sustain injury. Because when taken off of work, he didn’t need to work but his penalty [sentence] would still be deducted with the time he needed to serve to pay for the crime he committed. Day after day. Whether working or not.

[Some of them are that way]…I grabbed an ace wrap dressing and slowly and carefully, I wrapped it around his painful right foot to immobilize and provide a little relief to his right foot.

[They don‘t want to work!]….I prepared the hospital referral form and requested a deputy to take him to our county’s hospital to have his right foot be x-rayed.

[They are lazy!]…I told him to be patient until the transportation deputy showed up to take him to the hospital.

Because some of the inmates believe that they are entitled to all the benefits the jail has to offer. Yet, they contribute “nothing”.

Newton’s first law of motion says that “an object in motion tends to remain in motion, and an object at rest tends to remain at rest.” This can apply to us, people. Some of us are willing to complete plans or projects yet, for others, they need to be motivated just to accomplish something.

There is no room for laziness in a Christian’s life. Being a new creation, we are to be diligent and productive. Out of love for our Lord Jesus. The One Who redeemed us. “For we are God’s workmanship, created in Christ Jesus to do good works, which God prepared in advance for us to do.” - Ephesians 2:10

God wants us to be awake, be involved and focus on others.

Are you lazier than these "2 people"?