Taking Risks That Are Worth It

The first question which the priest and the Levite asked was: “If I stop to help this man, what will happen to me?” But the good Samaritan reversed the question: “If I do not stop to help this man, what will happen to him?” – Martin Luther King Jr
So…I wrote about that female inmate having a panic episode (my preceding post "I Hear You") and the female Deputy called me from near the cage that usually kept them and other staff if they needed safety when passing medications for Medical Staff or just the Custody, doing their work while monitoring the inmates housed in different dorms. Within their sight.
I wanted to pull the sobbing inmate away from the throng observing us and decided to bring her to the nearby, tiny Clinic where the medications and other medical supplies were stored.
“Let’s go!” as she replied that she could try to walk, the three Female Deputies hearing me. I shouted so they would know that I was taking that inmate away from the others. Which meant it would only be her and I in that tiny room. A risk I usually took when doing sick calls. But a risk that was always a necessity not only on my part but especially for the inmate who needed some space to be able to vent out her broken heart. Away from prying inmates. Away from deputies who were tired of hearing their pleas, sometimes, alibis and lies.
As she started feeling better, the tears drying out, I sensed a figure passed by. I saw the warm smile. I smiled back and greeted him. It was the Sergeant. And I knew he didn’t like what he saw. That it was only the inmate and I. He put an emphasis already during their briefing that morning... That officers needed to be there all the time as medical staff did sick call. For our safety. As inmates could be dangerous and unpredictable.
A female deputy all of a sudden appeared in front of the door. But my sick call was over by then. The deputy's face reflected an upset image. I knew…They must have gotten in trouble from the Sergeant.
Much later, the Sergeant came to our Main Clinic and spoke with me and the other nurse regarding his wishes to change that attitude. Of doing sick call. But always with the presence of deputy. I reassured him. It wouldn’t happen again.  But I didn’t apologize. Knowing I hollered to the Deputies who failed in following the inmate and me. When he left, the other nurse passing medications did tell me that when the Sergeant told the deputies that there was a nurse doing sick call and there was no deputy, they all acted that they were not aware. In short, they all lied to cover themselves. But still…They were the ones who got in trouble. 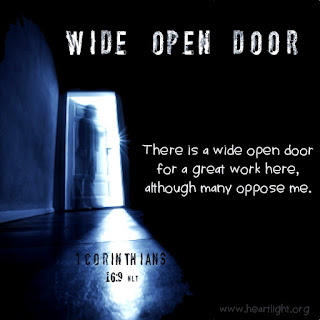 What the Sergeant did not know, I had to take that kind of risk all the time.
God’s children do…We all face dangers daily and face risks for God. We do when we want to share about Christ’s gift of salvation despite the fact that doing so will offend some. We take that risk even when people laugh at us or do not believe in the truth that we share. We take that risk when we love those who are hard to love and easily forgive no matter how many times we get hurt by others, much more with our enemies.
But it is the risk among the risks that is worth facing and tackling. Not for our personal gain. But for God’s glory alone. Most of the time, it will not be easy. But no matter what the outcome, we can be confident that God will never leave us alone as we take those risks and He is faithful to supply us with what we need.

May we take that risks without hesitation when opportunity comes to plant that seed in a perishing heart. Let us plant and let God do the harvesting with His sickle of love and redemption.
A servant of the Lord must not quarrel but must be kind to everyone, be able to teach, and be patient with difficult people. Gently instruct those who oppose the truth. Perhaps God will change those people’s hearts, and they will learn the truth. Then they will come to their senses and escape from the devil’s trap. For they have been held captive by him to do whatever he wants. – 2 Timothy 2:24-26 (NLT)
Inspired: 7/30/2012 08:07:00 AM 9 comments: