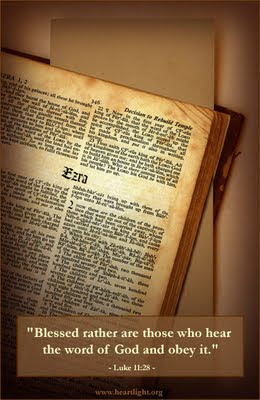 I read the long-anticipated email many times. I could not believe that they would make me go to work, starting this Friday. Only as needed. This plan was subtly executed to make me think that they were not getting rid of me. I knew better because what was said and what were done many times said otherwise.
They thought they could always plan things their way. They only selected those who they wanted to be in their team as long as they won’t cause a hindrance to their plans. They were known to intimidate those who didn't want to fight back and chose the easier escape: "they quit." They were doing the same thing with me but I had not done anything wrong. They couldn't go any farther. They seemed to be running out of plans. Because I had not resigned. I chose not to quit. And I chose to fight back. It won't be easy as it would involve exposing these deeds done in the dark. But I heard Him. The Truth. He promised He would be there for me and He had been there with me as I went through this trial. He already granted me His victory.
I read the Word again. My heart wanted to rebel but I had been warned many times to endure, to choose to forgive, to love, to show compassion, and to give revenge into His hands.
Without His Word, nothing else would have sustained me in this period of great battle I was in against some people who had been discriminating me. When they put me on a forced leave, I knew how important it was to even draw myself closer to Him. Through His Word, He healed my broken heart, He soothed my pain, He reminded me of His faithful promises, and He sustained me with all of my needs. What I lacked, He had given me even more.
His Word…Truly the lamp unto our feet…I must trust completely, knowing His ways and thoughts are higher than ours…
Do you trust in Him?
Inspired: 8/24/2011 01:54:00 PM 8 comments: