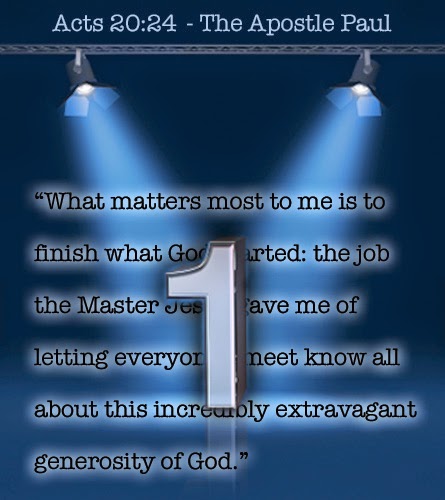 But I don’t care what happens to me, as long as I finish the work that the Lord Jesus gave me to do. And that work is to tell the good news about God’s great kindness.~ Acts 20:24 (CEV)

“Nice waiting area…” I thought to myself. As I waited for what seemed to be forever minutes. I arrived early prior to my xrays. Good thing I left from my house early. The first place I had checked out the day prior turned out to be not the right place and the confused lady at the desk checked her computer for schedules and directed me to go across the street at their other facility. I kept going around. In circles. Positive I was in the right place. Still…I’d seen throngs of cars parked. I couldn’t locate the building. Determined to get on the exit, I glanced on my left side. Only to find out I was indeed in the right medical plaza. Except the name of the building I needed to go to was facing the east while I was going in circles on the west side.

An older lady sat next to me. Struck a conversation and wanted to know why I wasn’t wearing a jacket as she noticed everyone else was in layers. Complaining she was very cold herself. I wasn’t sure what to say except…I was just not cold. She told me I was a lot younger anyway than most of the people in the waiting area. I thanked her. As I added that I might look young except I sometimes felt I was  “90”.

“Honey, I am 90!” she exclaimed. Without sounding offended. More of a reassurance that I wasn’t there yet. She looked good for her age. The strength she displayed as she took her steps while returning her paper works at the desk. Just would not show her age.

I felt I needed to explain. Why I said that. That I had been working nights for 25 years. As she asked where I worked, her eyes shone with excitement as she discovered a similarity between us, having worked in a hospital.

She said she wished people wouldn’t have a long life. Adding if not the memory other things would fail. To which I was quick to reply that “Life is a beautiful gift…” The way she had shown. With grace. With every strand of white hair displaying wisdom and experience gained in the normal process of aging. As she motioned her wrinkled but strong hands as she talked, I sensed the time those hands were invested with things that had more meaning, as each waning moment became a reminder to her still sharp mind.

I felt sadness with being interrupted from that great conversation. As the xray tech loudly called my name and her eyes scanning among the people sitting in front of her.

I had finished my xrays, a lot shorter than what I had waited for. I was still thinking of the lady. And the longing for her to have her race be finished. She reminded me…

How all humans are in a race. Some days are easy. Some are not. One may run or walk. But the destination is the same. The only difference is the manner of finishing the set race and the road a person is walking on.
Inspired: 3/12/2015 06:42:00 AM 3 comments: