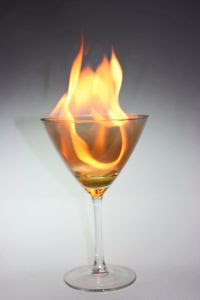 The smell of alcohol reeked all over the four corners of our tiny Nurse’s clinic in this particular unit. The rotating wall fan helped a little bit to scatter the intoxicating and repugnant smell as I started assessing one inmate sitting on the chair. The deputy was right next to me, listening intently to the outcome of my observation.

“I didn’t have anything, Ma’am. And I’m not on any medications either,” stated the man with a slight slurred speech.

He was obviously drunk and I just made sure that his vital signs were stable and that there were no problems over-all with his neurologic status. My notes would be for record-keeping.

“Next!” I yelled to the other inmate [the first man’s cell mate] as I motioned for the first inmate to leave the room and wait for the deputy outside this clinic.

The second inmate’s eyes were blood-shot, his steps wobbly as he tried to come in and make his way through the door. He denied taking anything intoxicating, too. I noted my observation, too on him. He was just plain drunk like the other man.

The deputy finally told me what really happened. He was making his usual logs - of checking every cell every hour and on that particular time, he noticed these inmates flushed something down the toilet. He observed that they were acting funny and trying to be silly. And he smelled the alcohol whiffed past his nostrils as he stood by their particular cell.

In the meantime that the deputy was conversing with me, these inmates were still having a good time laughing outside the Nurse’s clinic. They didn’t think that anything would happen to them. Little did they know, they would be in a lot of trouble when they sobered up. They were definitely caught intoxicated with “pruno”. And because they did it, there would be an additional time with their sentence when their latest violation of the jail’s rules would be added to their other charge or charges. They were laughing then, but I was wondering if they would still be laughing once they became more aware of what they were caught for.

In our lives, we make decisions, too that we don’t think of any possible consequences after doing so. Even with little, but wrong decisions, the truth is: it still leads to mistakes. Making the right decisions every day start with even the little choice we have to make. Then, we can be more prepared when the need to make bigger decisions come.

The wisdom or ability to make the right choices, either in small or big matters, is a gift from God. Understanding this makes us more willing to include God with our decision-making.
If we include God in all of our decisions, what can go wrong?