Get Up and Walk! - Spiritual Sundays

Sunday again...How fast this week had gone by. After the busyness, the hustle and bustle of life, let us take some time to pause and bask in His presence. The One Who deserves our attention, our time. Come and join me in this special place of warm friendship, of love, and of unity that comes from the Savior's love. Thank you sisters Charlotte and Ginger for hosting this place.


I responded to a man down on the female side. A young female was down on the floor, right by the doorway of her tiny cell, as her cellmate seemed to be so worried for her. She was complaining of dizziness and had been throwing up for 3 days. She was just booked on that same day her symptoms appeared.

Her vital signs were all normal as I tried probing more. Her story was not making sense at all, as one story led to another that didn’t have to do with what she related in the first place. I knew she was lying.

“Get up!” I softly ordered.

“Ma’am, with all due respect and I understand your concern, but let me just speak to her, okay?” I replied.

“Butt out!” yelled the female deputy to the cellie [cell mate].

“Okay. Get up and I want you to go to that nearby table,” I commanded again.

She got up fast and walked steadily. Then, pretended again that she was about to faint.

“Listen,” I said, “Stop it! If you want me to be able to help you, cut this out!” this time I spoke with a firmer voice. “Tell me what I need to know, not what you want to say!”

“Ma’am, I was using too much of my Norco that the doctor gave me for my back pain. I started using more and more everyday. Like 90 pills maybe a day?”

“Any other street drugs you use or used before?” I queried.

“No,” as she held her abdomen and complained again of wanting to throw up.

“Let me repeat my question…Any other drugs you used prior to coming here?”

“Yes. I used meth, too. But only a little bit,” she replied.

“I’m sending you to the hospital but there is no emergency. You are having withdrawal symptoms from the drugs you abused. It’s normal that you will have stomach aches, vomiting, nausea, diarrhea and sometimes, chest pain or other pains in your body. When you come back, I will start you on some medications that will also help you be relieved of these symptoms,” I explained.

“Thank you, Ma’am,” she softly mumbled.

“Now, get up and walk! Because I know you can! You need to get out of this segment so you can wait for the deputy who will bring you to the hospital in the waiting area.”

Without any complaints, she did get up and walked without any difficulty.

The deputy smiled at me and wondered, “How did you know nurse that she was lying?” 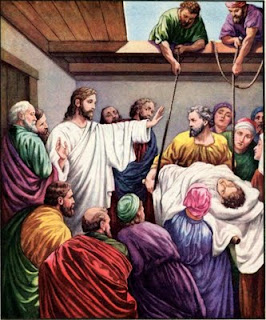 Four friends brought a paralyzed man on a mat to be healed by Jesus. Since it was so crowded, they dug through the clay roof above Jesus’ head as he preached. Then, lowered the man in front of him. Seeing their faith, Jesus said to the sick man that his sins were forgiven. Of course, there were religious teachers who thought what Jesus did was blasphemy to God.

But Jesus was not blaspheming. His claim to be the Son of God was true. So he told these religious teachers, “Is it easier to say to the paralyzed man, ‘Your sins are forgiven’ or ‘Get up, pick up your mat and walk?’ And because he wanted to prove his authority on earth to forgive sins, he told the sick man, “Stand up, take your mat and go on home, because you are healed!”

Jesus’ words still ring true today. Because of our faith, Jesus had already forgiven our sins when we believed and had called on him. But it doesn’t stop there. We are not to be paralyzed with our walk with Him.

Arise…Walk…That’s God’s call for actions. Turn and live…That is our powerful testimony of spiritual healing for His glory: that we are able to get up from whatever afflictions that made us unable to move and now, can walk!

That’s Who Jesus is…The Comforter. He loves to comfort the hurting ones. He loves to heal the sick ones. He gives freedom for the oppressed. We all have fallen into different abyss of despair. But Jesus has been reaching out his hand to save each one of us. It’s just a matter of trusting him and reaching back to his outstretched arms.

Enough of self-denials. Of lies. Of selfishness. So, what are you waiting for? Grab His hands, stand up and walk!!!”