Heard over the radio: "Unit 8 nurse, we got a mandown."
Medical: "Nurses en route."

2 pairs of hurried steps echoed all throughout the hallways from the clinic to Unit 8. A big bag with emergency kits was strapped over one shoulder of my co-worker. My hands were carrying an O2 Sat monitor [gadget that detects O2 saturation in the blood and checks the pulse], as my own teal stethoscope dangles around my neck. Unmindful of the weight of the radio hidden in my scrub uniform's left pocket.

The metal door opened and a waft of cold breeze hit both of us. We didn't get a chance to get the particular inmate's medical records. The deputies motioned us to enter an opened metal door housing the "downed"inmate. He wasn't responding, according to the other inmates housed with him in that particular unit. They got concerned and called the deputies.

A heavy-set man was lying on his back, with opened eyes that had a fixed stare. His skin was very cold, clammy and very diaphoretic. He was motionless, as his right arm seemed a little bit contracted. This life mingling with other inmates a while ago, now rested on both my co-worker's and my hands. To both of us, he was not just an "inmate." He was one of us, loved the same by our God, whose life was now in imminent danger. We had to make a quick yet accurate decision with our interventions as we felt like we were losing him. The other inmates laying on their own beds had their eyes glued to us as this drama began to unfold.

Noting that he was wearing a "yellow band" that medical staff put if they have a history of heart problems or diabetes, I noticed he was diabetic and has a history of hypertension. While my co-worker attempted to start an IV, I decided to check his blood sugar level. It was "31", a very low reading.
I found the small, orange plastic box that housed the small syringe with glucagon or sugar in it that I could inject to his muscle to make his blood sugar rise. With quick hands, I was praying softly in my head, "Lord, help us to do Your will. Guide us with Your wisdom and protect this precious life." I gave a shot to his right thigh.

The other nurse unsuccessfully found a vein as they all seemed to have collapsed. I checked the other vital signs, blood pressure was normal high and pulse was okay at 59-60 beats per minute. His respiration was not labored though slow and seemed to be shallow. I reached for another shot of "sugar" as we were not able to give the intravenous form. I aimed for the right deltoid muscle of the arm this time.

The wait seemed to be forever, as every minute passed by and we waited for the ambulance to come. It felt like everything was on a standstill. 10 minutes after the second shot I gave, miraculously, the man started talking and was revived. His contracted right arm started reaching for his blanket and he was answering appropriately to the other nurse's questions as if he just woke up from a dream. Accucheck went up to "55", still low but that's a lot better than the other reading. He sat up, thankful when he found out what we did to help him. [No! Thank You Lord for giving this man another chance!].

My co-worker and I sighed with a big relief! Our stiff and tensed faces were able to relax more and smiled as we kept on reassuring the man. That man's life needed the hope of being revived physically but I started wondering if that life remained dead with his inherited sins and desperately needed the spiritual renewal that Jesus offers to everyone who would humble themselves before Him and accept Him as Lord and Savior... 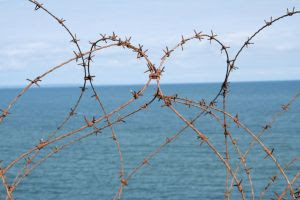 Life is not easy in the jail. Some of these incarcerated people are deprived of God's knowledge, of His love, of His grace. How many of them are feeling hopeless inside those tiny, cramped cells? How can they reach out their hand if there was no source of light?

They are physically alive but remain spiritually dead, just like how we, born-again Christians once were. They need a rebirth, a new life in their spirit, like what we had received.

If you find yourself in a dark place with others, you could be representing that light that God reflects. Sometimes, that's all they need is to know that there is hope....through you...from God, the Source of Hope and Restoration. May God shine upon us so we can shine and be able to be seen by those reaching hands all around us. 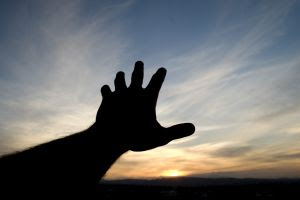 
Psalm 146:5 -"How blessed is he whose help is the God of Jacob,Whose hope is in the LORD his God"

Romans 5:5 -"and hope does not disappoint, because the love of God has been poured out within our hearts through the Holy Spirit who was given to us"

1 Timothy 4:10 -"For it is for this we labor and strive, because we have fixed our hope on the living God, who is the Savior of all men, especially of believers."

1 Peter 1:3 -"Blessed be the God and Father of our Lord Jesus Christ, who according to His great mercy has caused us to be born again to a living hope through the resurrection of Jesus Christ from the dead."
Inspired: 4/26/2009 08:45:00 PM 6 comments:

You Are The One

You Are The One

You are the One Who changed my heart

You are the One Who made me whole

You are the One Who saved me

You are the One Who gave me life

You are the One Who comforted me

You are the One Who filled me up

You are the One Who set me free

You are the One Who loves me faithfully

And You, my Lord, You are the One

And You, Jesus, You are the One