You can also watch this video. 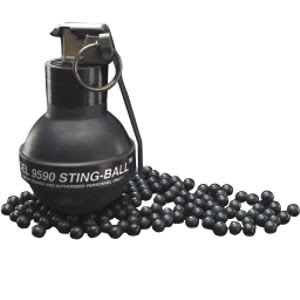 Stingball grenades are used to stop huge prison riots. It looks like a hand-held grenade and has 180 rubber pellets inside that can travel up to 50 feet from the area where it was detonated. When discharged, it produces a loud sound, a bright flash of light and sends those pellets everywhere to stun the rioting inmates.

I had seen the power of this non-lethal weapon used for many years in prisons. One night, out in the prison yard, obscured from inmates, the Sergeant demonstrated different kinds of forces and non-lethal weapons used to stop prison riots to us, the medical staff. Even when we were far, the sound it produced was scary, the light was surprising and blinding as it was thrown in the darkness of the night. And the medical staff huddled together… Frozen! Stunned! Afraid!

Sin had brought a lot of complications into our lives. Because of it, we, too, have a fight that goes on. Everyday. It starts with our decision-making. When we fall into sins’ traps, obviously, that’s when we make the wrong decisions. The Holy Spirit is here to convince the world of its sin. It comes like that stingball. When It hits you, of course, it hurts. Because He wants to bring you and I to repentance. He lets us know about God’s righteousness to anyone who believes.

John 16:8 - “And when he comes, he will convince the world of its sin, and of God’s righteousness, and of the coming judgment.”

He also disciplines His children. Sometimes, even those who had previously surrendered to His Lordship still fall back to their old, ugly habits. But He comes in a big surprise like a stingball to stun or stop someone from being trapped again. The only thing that matters is how that person will accept the Holy Spirit’s conviction and discipline.

It is not enjoyable to feel the sting from God’s discipline. We can either accept it with resignation, or with self-pity thinking that we don’t deserve it, or even with anger and resentment toward God, or perhaps gratefully? The last one is the right response. When we learn to endure, it produces righteousness in the end. God does this because He loves us.

4In your struggle against sin, you have not yet resisted to the point of shedding your blood. 5And you have forgotten that word of encouragement that addresses you as sons:

"My son, do not make light of the Lord's discipline, and do not lose heart when he rebukes you, 6because the Lord disciplines those he loves, and he punishes everyone he accepts as a son." 7Endure hardship as discipline; God is treating you as sons. For what son is not disciplined by his father? 8If you are not disciplined (and everyone undergoes discipline), then you are illegitimate children and not true sons. 9Moreover, we have all had human fathers who disciplined us and we respected them for it. How much more should we submit to the Father of our spirits and live! 10Our fathers disciplined us for a little while as they thought best; but God disciplines us for our good, that we may share in his holiness. 11No discipline seems pleasant at the time, but painful. Later on, however, it produces a harvest of righteousness and peace for those who have been trained by it.

And the beauty that comes from the sting of the Holy Spirit? It doesn’t kill anyone. Instead, it offers a gift of eternal life and righteousness!