Cancer Had Been Cured

“The Spirit of the Sovereign Lord is on me, because the Lord has anointed me to preach the good news to the poor. He has sent me to bind up the brokenhearted,to proclaim freedom for the captives and release from darkness for the prisoners, to proclaim the year of the Lord’s favor and the day of vengeance of our God, to comfort all who mourn, and provide for those who grieve in Zion - to bestow on them a crown of beauty instead of ashes, the oil of gladness instead of mourning,and a garment of praise instead a spirit of despair.”
- Isaiah 61:1-3 [NIV]

Cancer…Who doesn’t know cancer? It affects anyone. Anywhere. An awful disease that claimed my loving father’s life back in December 2007. Diagnosed with colon cancer in 2005, it slowly spread and progressed toward devastation. It hurt him. It hurt us. His children. And many others who knew and loved my father.

Grimacing in pain at times, he kept silent. He wanted to show he was strong. He showed he was at peace at the same time. Marked by quiet rests as he laid on his bed, unable to get up anymore. For a little over 2 weeks. As my brothers and I constantly surrounded him. Buying more time to tell him how much we loved him. Feeling a hole growing inside our hearts. The size of our father.

I treasured his hugs and kisses the more. Knowing how much strength it took him to wrap his arm around me. The way he told me he loved me with every precious breath. The way he kissed me on my forehead or cheeks, lifting his weary body just to be able to do so. Same with my grown-up brothers, nestled in his arms, as we each took turn. One softly caressing the wrinkled forehead, as I applied lotion on his weary feet that used to sail many oceans when he was younger.

Laughter filled his house as many teardrops fell. Laughter that echoed in that tiny room filled with his family and friends. They were mostly tears of happiness. As my father loved to joke around. People came in crying. But they left smiling or laughing. Neighbors were often wondering why we all looked happy. Despite the imminent arrival of “Death” at my father’s house.

He said, “Let them wonder. Because for the first time, they would remember a person who passed away with his family and friends laughing and celebrating, instead of mourning.”

Cancer could be prevented. Even cured if diagnosed early. But the etiology has been a mystery. 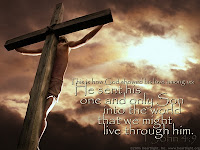 out a Healer Who loves to heal us all from sins’ cancer. This spiritual cancer had spread so much since a forbidden fruit was eaten at the garden of Eden. But God had an immediate plan. Way before. He sent His miraculous healing. His love. By the death of His own Son. Yes! That was “love” crucified on that wooden cross. Because of His shed blood, He conquered cancer. And other illnesses, known or not known in this world.

We are healed that is…if the cancer-stricken spirit believes what He did and accepts His gift of love and forgiveness.

Love soothes pain. Love mends a broken heart. Love brings along with it: joy, peace and hope. Joy and peace…The ability to celebrate despite the circumstances surrounding a sick and weary soul. And hope that death is not the end of life. It’s only the beginning of an eternal journey. Promised by His love. Jesus’ unconditional love.

Love that my father had received after losing my mother years before him. No wonder! He could smile. He could laugh. He had comfort. He was strong. Despite knowing death would come any minute to end his earthly journey. And as he breathed his last, I knew then that he won his battle. Cancer would never defeat a saved soul. My father was right. I was joyful for his departure, knowing that his destination was what we all longed for. A place of rest. A place where there would be no more pain. No more tears. No more suffering. A place where a mansion was prepared for those who loved the Healer.

Something beautiful halted that ugliness. The beauty of love that came from the One and only true Savior. Cancer…After all…was defeated. Cured. Nailed on the cross thousands of years ago…

“Surely he took up our infirmities
and carried our sorrows,
yet we considered him stricken by God,
smitten by him, and afflicted.

“But he was pierced for our transgressions,
he was crushed for our iniquities;
the punishment that brought us peace was upon him,
and by his wounds we are healed.”


"Our Father, Who art in heaven, hallowed be Thy Name.
Thy Kingdom come, Thy will be done, on earth as it is in heaven..."