I haven’t seen this nurse in a while. For a few weeks. I heard that her grandmother got ill, struck by the dreaded stroke. She had to take some time off and off she went to visit her in the hospital.

Last Saturday night, there she was sitting in front of the computer. I approached her and said my “hello” as her saddened face lit up and returned the gesture. Her eyes, visibly puffy and red from crying.

“How are you? How’s your grandma?” I asked one after another, with excitement upon seeing her back.

“She passed away,” she replied.

“I’m so sorry,” I uttered softly as I approached her and gave her a hug. All night long, she talked about her experiences with her at the hospital. While the rest of her family came from different locations and once again, they were re-united with their ill grandma. She related how her grandma’s fear of dying turned into a peaceful one as she felt everyone from her family surrounded her. The horrible symptoms of stroke limiting her but she managed to say “goodbye”, though some of them, she couldn’t recognize. Of how she was trying to fight sleepiness, to attend to her grandma’s needs. So hard, she said. But it was all worth it at the end.

“I’m glad you had some time to be with her.”

“Yes, Rcubes! Me, too. I was able to do things for her and she was able to tell us what she wanted. It was a good feeling even though it was hard in a way.” 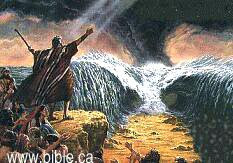 How true it is for all of us! How limited we are when we are trapped or confined because of life’s pressures. Life’s trials. It is a predicament no one wants to get into. But it happens. It is unavoidable. Like that stroke.

But there is Someone Who is there beside us. The One Who took His people out of Egypt using Moses to bring His people into the Promised Land. The Israelites trapped between the mountains and the sea and being pursued by Egypt’s army, He was the One Who opened up a path through the vast waters of the Red Sea with a strong east wind. So that His people could walk through on dry ground to the other side. And as the last Israelite had crossed over, the waters rushed back over the Egyptian chariots and swept them all away. The current wiping out the entire army of Egypt. [Exodus14:15-31]

We, too must pass through the parted waters. It is not an easy feat to see two walls of divided water in each of our sides. But we must continue to trust. To believe. To have faith. In Him. Alone. He is bringing us safely to the other side. Whenever we are trapped in a situation where there seems to be no escape, if the Lord did that miracle and parted the waters, what would be hard for Him to open up a path for us so we can escape? God can surely open up a way!

For now, as we continue to pass through this difficult trek, we are being given that chance to believe and trust in Him, no matter what circumstances we are in. Stepping on many bumps along this life's road, we can just turn our heads into the left of us or to the right of us. So we can be reminded of Whose breath holds those walls of water beside us. Don't miss those miracles being done now as we walk. They are the reminders of  God's love and faithfulness. His strength and power that will enable us to make it through.

Yes, this life's journey is not easy. We are passing through a purification process. One step closer to the Promised Land, one step away from Egypt [world]. Because when we cross over, we will leave behind us all of this world's cares and riches. Just like Moses and God’s people, we will sing their song of deliverance on the other side:

“I will sing to the Lord, for he has triumphed gloriously;
he has thrown both horse and rider into the sea.
The Lord is my strength and my song; he has become my victory.
He is my God, and I will praise him;
he is my father’s God, and I will exalt him!