For if anyone thinks he is something when he is nothing, he deceives himself. – Galatians 6:3 (NASB)

Everyone who is proud in heart is an abomination to the LORD; Assuredly, he will not be unpunished.
- Proverbs 16:5 (NASB)

But He gives a greater grace. Therefore it says, "GOD IS OPPOSED TO THE PROUD, BUT GIVES GRACE TO THE HUMBLE." – James 4:6 (NASB)

Do nothing from selfishness or empty conceit, but with humility of mind regard one another as more important than yourselves; - Philippians 2:3 (NASB)

Like clouds and wind without rain is a man who boasts of his gifts falsely. – Proverbs 25:14 (NASB)

We are destroying speculations and every lofty thing raised up against the knowledge of God, and we are taking every thought captive to the obedience of Christ, - 2 Corinthians 10:5 (NASB)

“Blowfish! That’s it! You’re like a blowfish! (expletive)…” yelled the deputy who brought a 19 year old male, newly-booked in our prison.

Sitting with his wrists cuffed behind his back, he looked briefly at the deputy, then to each of our (medical staff) faces, his eyes burning with arrogance that he didn’t do anything wrong. He just wanted to help himself.

“What happened? I just saw you 2 hours ago?” asked the male nurse who previously treated him.

Two hours prior, he was about to lie down on the assigned small bunk in his segment. He felt a strong blow to his left eye as discoloration quickly set in. His left eye becoming puffy. Another blow hit his mouth where he sustained a small cut on the middle of his bottom, slightly swollen lips. Being new, he was a target by those inmates prowling on newcomers. Making a statement as if they owned that place. Because they were strong. Fists proving such power. He didn’t fight back as the deputies in the unit stopped the fight on time. Before this young man succumbed to more injuries.

The male nurse made sure he didn’t need to go to the hospital. But gave him medications to help with his pain and swelling.

The medications were not that strong but its strength was the maximum correctional nurses were allowed to dispense to sick inmates. He claimed he took a few but he felt the pain becoming more intense. No relief…That despite the harsh event that occurred at first, was replaced by another caring inmate wanting comfort for him that he offered his own medications issued by the doctor to this young man. He swallowed a few. The name he forgot according to him. Few minutes later, his lips swelled three times its size. His complexion becoming red all over and with itching that came on, he started scratching his arms until they became redder.  He was obviously allergic to what was given to him.

“That’s why you’re not supposed to take anything that anyone gives you here except what is given by the medical staff,” yelled the deputy.

We sent him out as the doctor requested we not gave him anything until he examined him himself. A couple of syringes and IV medications on hand as I also ran to get an Epi-pen on a stand-by as we waited for the ambulance to take him. In ER, he was given the same medications we had prepared. Every nurse was concerned and made sure he was able to breathe. His lips returned to just a mild swelling he sustained from the punch earlier. The redness on his body completely disappeared. He wasn’t checking each of our faces anymore. He was looking with more gratitude as I sensed despite the lack of words. He knew, he was trying to be self-reliant and not believed what was told by the treating nurse. Instead, listened to another inmate he shouldn’t have trusted.

“Thank you…” he added as he looked at each nurse’s faces…He got up and this time we, the medical staff knew…He would be a better listener… Especially to medical advices…Because no inmate knew better when it came to saving lives. And even if they were medically trained outside, they were not authorized to do so behind bars.

His shadow was long gone but still remained in my memory. The shadow that resembled mine once. Surely, I was a “blowfish” like him. Puffed up with pride before Christ’s grace resided in my heart. Self-reliant. Thinking I could do everything on my own. But I was wrong. Christ proved me wrong. For pride was not from Jesus.  And as He helped me be quick in not letting my “head”  and “heart” puffed up ever since, He also taught me first…in knowing when to spill compassion and to give favorable allowances to others’ faults. 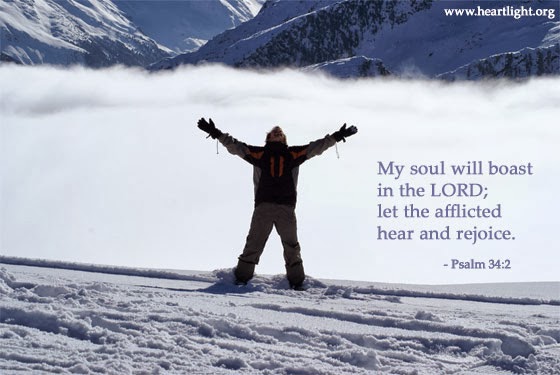 In the first place, I must try to describe pride to you. I might paint it as being the worst malformation of all the monstrous things in creation; it hath nothing lovely in it, nothing in proportion, but everything in disorder. It is altogether the very reverse of the creatures which God hath made, which are pure and holy. Pride, the first-born son of hell, is indeed like its parent, all unclean and vile, and in it there is neither form, fashion, nor comeliness. – Charles Spurgeon
Inspired: 2/19/2014 09:57:00 AM 5 comments: