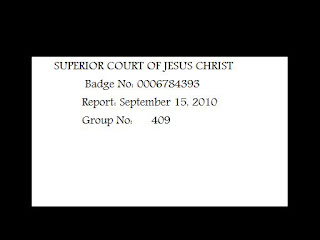 I got called to report for jury duty today. There was already a long line by the time I got to the court house before 8am. We were scanned prior to going downstairs where we were all kept in a big room. Down there, we were offered free hot drinks and there were lots of t.v. sets and reading materials to keep us awake? Everyone waited patiently on who would be called to go and see the judge presiding over a trial, either hoping or not to be selected to become a juror in a criminal trial. They called 65 names after a few hours of waiting. I wasn't called. Thrilled as I was not to be called, I knew I still have to endure few hours more in this waiting game. Jury duty is everyone's responsibility as citizens of United States of America. There's no excuse not to serve except if serving as a juror would cause financial hardship or there are health issues with potential jurors. I get called every year.

Death is inevitable. I can't imagine when each of us is called to face the Only Judge, Jesus Christ. Unlike in a jury service where jurors can serve once a year, when we die, once called by our Creator, there's no more turning back. From 2 Corinthians 5:10, "we must all appear before the judgment seat of Christ." Revelation 20:12-15 - "I saw the dead [John's vision], both great & small, standing before God's throne. & the books were opened, including the Book of Life. & the dead were judged according to the things written in the books, according to what they had done. The sea gave up the dead in it & death & the grave gave up the dead in them. They were all judged according to their deeds. & death & the grave were thrown into the lake of fire. This is the second death- the lake of fire. And anyone, whose name was not found recorded in the Book of Life was thrown into the lake of fire."
We are not saved by our deeds but deeds are seen as clear evidence of a person's actual relationship with Christ, confessing Him as Lord. Have you placed your trust in Jesus Christ? If you are summoned to face the Judge, would your names be in the Book of Life? Would you be confident to say that you had completely placed your trust in Jesus Christ and that your life's deeds would reflect a life living God's way? Romans 10:9 - "If you confess wiht your mouth Jesus is Lord and believe in your heart that God raised Him from the dead, you will be saved."
Inspired: 2/11/2008 05:08:00 PM No comments: