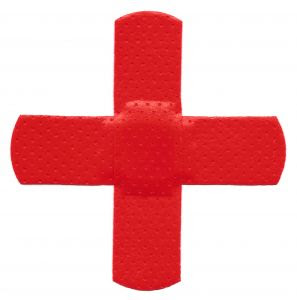 The jail kitchen’s extension number was flashing on the phone as it rang.


“Hi Nurse. We have an inmate here who accidentally cut his finger from the serrated edges of the plastic wrap as he was wrapping the food trays. We had been putting pressure for a while and it’s still bleeding a lot!,” was the jail cook’s reply.


“No problem. If he’s okay to come down here to the clinic, I’ll see him right away.”


A minute later, a tall, white, young male emerged holding on to his index finger of the left hand. I didn’t even ask, I immediately let him in, into the Exam Room. When I asked him to let go of the pressure, there was only a blood-soaked Band-aid dressing visible.


“Go ahead and remove the Band-aid, Sir,” I requested.


As I was doing a lot of things at the same time, like getting his vital signs right away and observing the wound, I started asking him some medical questions, too. The cut was not bleeding actively anymore when I saw it. However, in his set of vital signs, he had a low grade fever. I asked him if he had cold symptoms from the past days and he said he did, for about a couple of days. But he denied coughing or having trouble breathing.


I got concerned with his cold symptoms because of the last flu scare we had in the jail few weeks ago and with him, being in contact with other inmate workers and with preparation of food, I wanted to take him out for a few days so others would not get sick until we made sure that he wasn’t contagious. I handed a mask and to which he obliged right away.


I took another look into those glassy eyes.


“Sir, there’s more to those glassy eyes of yours. I know you’re not in pain from that minor cut and you’re not too sick. Would you like to tell me what’s going on, that is…pause… only if you want to tell me because it is still your right not to do so. I’m only wanting to help you the best I could.”


The head looked down. The facial expression turned to sadness. As good as he was with eye contact the whole time I was speaking with him, this time, he was looking at the floor.


With a sad tone of voice, he replied, “Ma’am…pause…You’re right. My mom just passed away on the 31st [July] from throat cancer. It hurts that I didn’t get to see her because I’m not out until October.” A deep sigh followed.


The jail is strict in implementing policies. The staff is not allowed to talk with inmates especially in friendly manners, as if they are friends. That prevents the staff from the possibility of developing close relationships with inmates. It is for safety concern. And I did hear a lot of stories that some of the staff ended up trying to help the inmate they became fond of, to escape.


That moment was crucial for me. I felt the higher policy that comes from the Highest Authority. He commands His children to love Him first, and then, love others, even our enemies. We are to shine our light so that those living in darkness still will tend to know that Source, which in turn, will give them the hope that they thought is forever lost, being in that dark place.


Staying calm with my composure, praying in my mind for the Lord to quietly guide me with what to say, I said, “I’m so sorry to hear about your loss. That must be difficult that you didn’t see your mother. But if you don’t mind me asking, how old is your mom and if you have a family?”


“Ma’am, you have no idea that I’m so glad that someone finally understands me. Of course, I don’t mind to tell you. My mom was 65 and yes, I’m married with 2 children and I miss them,” came the reply with an excited tone, this time his eyes met mine and he wasn’t backing down. His eyes lightened up.


“No offense meant here, Sir. I don’t need to know why you’re here in the jail. But if there’s an opportunity for you to be released and start a new life, do so. I know life is so precious, and your mom had lived for 65 years, but you have a family waiting for you and that’s who you live for, especially your children. I’m sure they miss you, too.”


“You are so right, Ma’am. Thank you so much for everything. Thank you for treating me and talking with me. I feel better now. And yes, I will try not to be back here again. My family is important! And I learned so much…”


[Back of my mind: “Lord, may this man know You because I know that’s the only way he can change and be healed with his wound deep inside…”].


He went back to his unit after I took him off of work for a few days so he can properly grieve and rest to fight the cold symptoms. I had scheduled him for another nurse follow-up to make sure that he was not running a fever anymore and that, his cut was infection-free.


That man was not bleeding from his wound. He was bleeding and hurting in his heart! I saw that in him, just like the way God saw my wounded heart years ago. That “person” was grateful as he walked away from me. A “person” not an “inmate”. The way God looked at me: “His child” not an “enemy”.


There is no big wound that God can not heal…


He gave me beauty for ashes, joy instead of mourning, praise, instead of despair. Instead of awaiting my death penalty, He saved me and declared me “not guilty!” when I believed in His Son Jesus.


Yes, I am grateful that Someone understood me…Finally!