The teaching of your word gives light, so even the simple can understand. – Psalm 119:130 (NLT)

I will lead the blind by ways they have not known, along unfamiliar paths I will guide them; I will turn the darkness into light before them and make the rough places smooth. These are the things I will do; I will not forsake them. – Isaiah 42:16 (NIV) 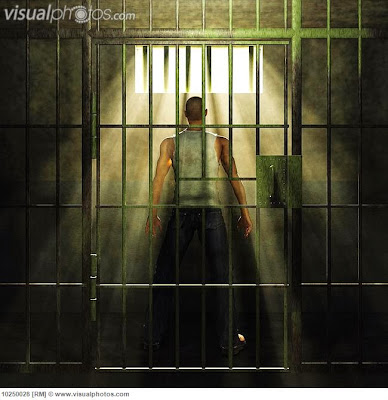 The other nurse rushed past me, carrying a kit that contained everything to start an IV. As I concentrated on increasing my pace to go to the prison’s Intake and was about to help the Intake Nurse getting swamped with arrestees who arrived from many streets in the county. She requested if I could just check and write on the logs and made sure all the suicidal inmates and those that were intoxicated were all doing well.

The noises were deafening as one drunk kept yelling profanities at the deputies. Busy shoving bodies to a particular cell to be processed, no one had time to pay attention not unless he would start hurting himself or others sharing the tiny cell with him.

I saw different shapes of humans wrapped in the grayish Velcro-strapped gowns. Some asleep. On their right side. On their left. On back or stomach. Whatever was comfortable, they did to try to get some rest they were craving for. A few of them talking as they sat on the wooden bench and slowly hushed as I came near the huge glass window. They acknowledged when I called their names. Surprising that no one had intimidated me. Most were cooperative and appeared calm.

I saw him. All alone in the adjoining cold cell. Pacing back and forth, his dirty feet approached me as he saw me charting something on the piece of paper that belonged to him. He was studying me. I could feel that kind of stare. A little surprised when I looked up all of a sudden and asked him how he was doing.

Raising my left arm with the wrist watch on it so I won’t lose some of my vision of him, I replied, “Almost 5:00.”

“It’s hard to tell. There’s no light,” he quickly answered, a huge smile occurred and exposed his white, pearly gems. I saw the tiny cell’s light on the ceiling shone on his head. It illuminated his weary face. But I could see he was also a handsome man. A good-looking guy on the outside yet tormented by stormy thoughts inside.

“It is huh, Mr. K. But you know what? I can say you have been patient waiting for the doctor. When the light comes outside, a few more hours and he will be here to check on you. Okay?”

“Thank you, Nurse,” I audibly heard as I made a u-turn and went back to the Nurse’s clinic to chart on all of their paper works.

Back in my mind, something was revealed from that encounter.

That darkness never lasts. The light is always there shining and waiting for its chance to have a breakthrough.

The light that always waits for any heart that would see its brilliance. A heart that is willing to accept and embrace it.