“For I tell you that unless your righteousness surpasses that of the Pharisees and the teachers of the law, you will certainly not enter the kingdom of heaven.” ~ Matthew 5:20

Dried blood oozed from the left side of his forehead. As a large amount of it was visible on a white washcloth he used to put pressure on that wound with his slightly, trembling hand.

As I cleansed the wound, I already knew it needed to be sutured. Having no doctor in the facility during the night, he needed to be brought by the deputy to the county’s ER. I applied a clean gauze to keep the pressure on and to keep the wound dry and clean.

He didn’t remember much. He just remembered waking up, as a couple of deputies were assisting him to rise up from the cold floor where he had fallen. He complained of slight dizziness. His crime was committing an injury to his spouse.

Inside the prison, despite being violators of varying kinds of crimes, some inmates just don’t like those who commit abuses: physical abuse and sexual abuse, especially with children. They are ready to hit those offenders [if known], even to the point of killing them.

The jail’s classification system always try their best to put inmates into those housing where there would be lesser complications with other cellies [cell mates]. But sometimes, no matter how careful they are, there would always be someone who will find out and then, tell others. They are known as “snitchers”. 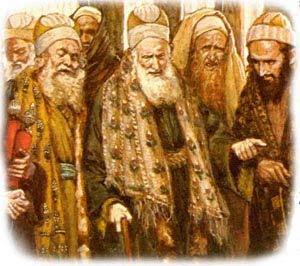 
There were 3 religious societies of Judaism in Jesus’ times: the Pharisees, the Sadducees, and the Essenes. The Pharisees were often the most influential and vocal among them.

The name “Pharisee” in Hebrew means separatists, or separated ones. They were known as chasidim, meaning loyal to God or loved of God. But the irony of it…they made themselves the most bitter, and deadly opponents of Jesus Christ and His message.

The Pharisees, perhaps, meant to obey God, but eventually they became so devoted and extremist in very limited parts of the Law [plus whatever they added to it]. Doing so, they became blind to the Messiah when Jesus was in their very midst. They saw His miracles, they heard His Words. But instead of receiving it with joy, they did all they could do to stop him.

To the point of killing Jesus because He truthfully claimed to be the Son of God. They were the snitchers in Jesus’ time!

Self-righteousness is not righteousness. God’s true people are to live according to His Word, not just to a certain part that is convenient or to one’s own liking.

"How many observe Christ's birthday! How few his precepts!O! 'tis easier to keep holidays than commandments."~Benjamin Franklin, Poor Richard's Almanack, 1757