The Name Above All Names

She was confused, pacing in the clinic’s waiting area. She had been in and out of this jail. Her addiction to alcohol was so severe that her liver started deteriorating and same with her cognitive functions. She was known to be “homeless”. I glanced at her chart before assessing her and taking her vital signs. Her name was “Penny Cash”.

When I was just a new nurse years ago, I used to pass medications to inmates housed in different housing. With careful preparations to place the prescribed medications inside a tiny envelope with the inmate’s name on a printed label in front of this envelope, medication nurses would go and give those one by one, as the inmates walked up with a cup of water and their ID’s. This man was housed alone and with the deputy opening just the tiny door in his cell’s door, he would often just stick out his right arm and with a cupped palm, I would pour the medications on it. Giving him meds for a while, I had learned about his story. He stabbed a female companion to death. Spared from death penalty, he was given a life sentence because of that horrifying act. I looked at the name printed on that envelope: “Lawless” was his last name.

Doing the charge nurse role one night, I had told my co-workers to take a break altogether so at least they could enjoy their break and it was a quiet shift at that time anyway. If I needed help, I could easily just call them over the radio. I got a call from one of the units and requested for me to evaluate this distressed man.

When this young male came, I started probing, “The unit told me that you seem restless. Are you hearing voices, Sir or do you have any history of mental health problem?”

“Yes. I’m hearing voices. The devil is telling me to kill myself,” as his voice seemed to have come from under the grave and his intimidating look met mine.

“Do you believe in God?” I calmly asked.

“No! There is no God!” as he smiled sheepishly.

“Christian” [I placed him on suicide watch to be treated appropriately].

When morning approaches, it’s a busy time for the LVN’s as they do their accuchecks and administer insulin to those who are on it. One time, I was helping them by calling the inmates’ names so the LVN’s could monitor retrieving back the needles from every inmate and would not be distracted by others.

“Oh, I’ll be here for a while, Ma’am, I still need to go to my court dates” was the response of this smiling middle-aged male.

I’m not making fun of these names I had mentioned. Everything was true! And I started paying attention because I was thinking to myself that their names made it more interesting with whatever situation they were in. 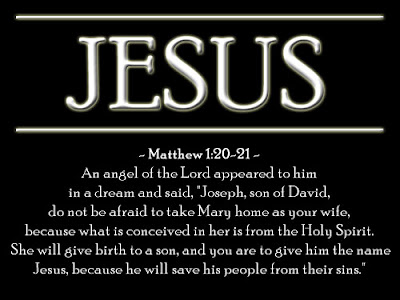 But there is a Name that stands out among all the names. It is the Name of “Jesus”. For those who are saved, “Jesus” is the most meaningful name we have ever known.

Philippians 2:8-11 –“And in human form he obediently humbled himself even further by dying a criminal’s death on a cross. Because of this, God raised him up to the heights of heaven and gave him a name that is above every other name, so that at the name of Jesus, every knee will bow, in heaven and on earth and under the earth, and every tongue will confess that Jesus Christ is Lord, to the glory of God the Father.”

You have the power to choose now whether you want to commit your life to Jesus as Lord or will you rather be forced to acknowledge Him as Lord when He returns?