Take Us Out Of The Dark 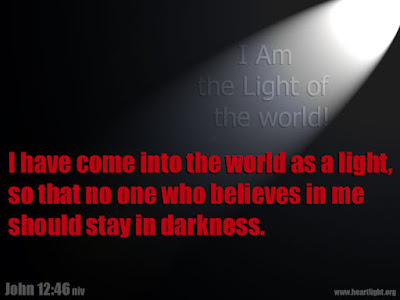 Ephesians 4:17,18 –“Live no longer as the ungodly do, for they are hopelessly confused. Their closed minds are full of darkness; they are far away from the life of God because they have shut their minds and hardened their hearts against Him.”

John 8:12 –Jesus said to the people, “I am the light of the world. If you follow Me, you won’t be stumbling through the darkness, because you will have the light that leads to life.”

A unit called and requested the medical staff to evaluate this particular inmate they observed kicking the door at times and had not slept all night long. The charge nurse gave me the chart. He was just incarcerated that day. Asthma was the only medical problem marked on his health screen form. There was no history of mental problems.

A few minutes later, a tall man walked up to the clinic. His exhausted face had puffy eyes, red and slightly teary. He had good eye contact. Except, he seemed to be feeling low. He walked with a steady gait, but with noted slouched shoulders. He slumped on one of the blue chairs we use for sick calls.

To make the story short, the man admitted that he was hearing voices telling him to hurt himself. He has a history of depression, too.

I placed him in Suicide Watch to have custody and medical staff monitor him 24 hours a day for his own safety. I uttered a prayer for this depressed soul. I knew then, that whatever he was going through, ONLY the LORD knew…

“When morning comes, he will get the help he needs when the Psychiatrist comes. For now, it’s very important that we monitor his safety and keep him from taking his own life,"I told the deputy.

That man was long gone but I kept on thinking how hard it must be for him to be in this dark place, the jail, where there seemed to be no hope if he finds out that he has to stay for a long time because of the crime he committed. But much more, for his mental state to be also in the dark. That was like being imprisoned twice, physically and mentally!

We are all like that man, walking in the valley of depression, of darkness, of spiritual death. We are all spiritually dead because of sins, and only GOD KNOWS.

From Chapter 37 in Ezekiel [Life Application Bible], the Spirit of the Lord took Ezekiel to a valley filled with bones. The bones were scattered everywhere. And the Lord asked him, “Son of man, can these bones become living people again?”

“O Sovereign Lord, You alone know the answer to that,” replied Ezekiel.

The Lord said, “Speak to the winds and say: This is what the Sovereign Lord says: Come, O breath, from the four winds! Breathe into dead bodies so that they may live again.”

From Ezekiel’s vision, it illustrated that a new life can be restored both physically and spiritually. The dry bones represented the Jews in captivity – scattered and dead. Ezekiel felt he was speaking to the dead as he preached to the exiles because they rarely responded to his message. But these bones responded! Just as God brought life to the dead bones, He brought life again to His spiritually dead people.

Because God knew our state of eternal death, He sent His One and Only Son to be the sacrifice. He took away our sins by dying on the cross. But we must let Him in, into our hearts by believing in what Jesus had done. He is our only hope to restore our broken relationship with the Father, no one else.

If you are suffering from depression, please visit Brother Peter Stone’s site, a man who once walked in the valley of depression. But because of God’s grace, he managed to get out of the valley and eventually, he emerged on top! To God be the glory!

For those of you feeling there’s no more hope, let this post recommend you to be seen by Jesus! He knows what’s best for you to stop you from your heartaches and pains. Let His Light shine in the dark areas of your life. Please click on “Roman Road to Salvation” on my side bar to know how to accept Jesus into your life and live a life that will be full of meaning and hope. Just have faith and believe! We can have clarity and knowledge that comes from the Lord!